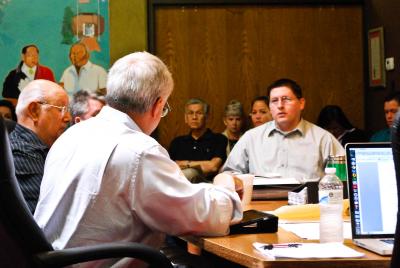 The debate between the Second Osage Nation Congress and the Executive Branch over Treasurer William Kemble’s subpoenaed emails is heading for the courtroom.

A Congressional subpoena demanding emails from Kemble’s work computer concerning any aspect of his job since February is being challenged by the Executive Branch. Court papers from both government branches have been filed to either contest or defend the subpoena. Now both sides must wait for the Nation’s Trial Court to hear the case.

“We are waiting on the judge to set a hearing at this point,” Congressional staff attorney Loyed “Trey” Gill told the Osage News on Sept. 29.

The subpoenaed emails are being sought in the wake of the July Congressional subpoena meetings with Kemble and accounting staff. Congress conducted the two-day hearings after receiving tips of potential problems with the office practices, which includes a transfer of Osage Minerals Council funds from one bank to another without the council’s involvement. Kemble defended the funds transfer after collateralization issues arose at First National Bank in Pawhuska where the OMC accounts were being held.

On July 15 Congress voted to issue subpoenas for nine pieces of documentation to aid the investigation. Kemble responded to all but one of the subpoena document demands served to him on Aug. 2 which read:  “All of your emails from any Osage Nation-owned computer from Feb. 1, 2011 to the present concerning any aspect of your job.”

Kemble, through court papers, motioned to quash the Congressional subpoena on Sept. 9. Citing the Nation’s Congressional Subpoena Act (ONCA 07-48), the motion to quash states that the email request “subjects a person to undue burden or hardship,” which is listed as a reason a person may contest a subpoena in court.

Kemble told the Osage News on Sept. 27: “My files contain at least 3,145 e-mails sent and received during the period covered by the subpoena. That's definitely an undue burden in my book, and I think the Court will agree.” This response to the court addresses the Congressional reply to Kemble’s motion to quash the subpoena.

The Congress asked the court, in a Sept. 12 filing, to deny Kemble and the Executive Branch’s motion to quash the subpoena, stating: “electronic mail is generally brief in nature and can be reviewed quickly.” The Congress also contended Kemble had yet to file an affidavit in support of proving undue burden or hardship in providing the subpoenaed emails.

The Executive Branch’s quash motion initially estimated Kemble sent or received more than 1,000 emails. Kemble said an affidavit has since been filed listing the 3,000-plus number of emails he sent or received.

In the Sept. 9 quash motion, Kemble and the Executive Branch argued: “Compliance with the subpoena would require a physical examination of each of these emails and a determination of whether each individual email ‘concerns any aspect of (Kemble’s) job.’… Such an examination would consume countless hours, preventing (Kemble) from fulfilling his Constitutional duties as Osage Nation Treasurer.”

The Executive Branch’s quash motion also states, “(Kemble) would have to review each individual email to determine, on a case-by-case basis, which emails are subject to executive privilege, attorney-client privilege, or some other applicable privilege or protection – a task which, due to the nature of the privileges in question, could not be reasonably delegated to office staff.”

“Congress never denied that the request was vague, or that the subpoena required me to disclose privileged communications,” Kemble said. “Instead, Congress merely argued that the motion to quash was invalid because I didn't give the Court an affidavit about the number of e-mails.”

The Sept. 9 quash motion came two days after the Congressional Committee on Government Operations met and approved a written report on the July 14 and 15 subpoena interviews and previous subpoenaed documents received. The report issues findings such as: Kemble: “implemented new policies and procedures, in the absence of an emergency, without submitting them to (Congress) for approval in violation of the Treasury law; has failed to adhere to the existing approved policies and procedures; and has moved Minerals Council funds without the knowledge and authorization of the members.”

Referring to the report, Congressman Raymond Red Corn (the committee vice chairman and Congressional Second Speaker) also noted (during the Sept. 7 meeting) the Treasurer’s executive assistant is receiving a salary set at a rate higher than what was appropriated in the 2011 fiscal year budget. The report states the new hire paperwork for the executive assistant position was signed by Kemble, and the offices of Human Resources and Principal Chief John Red Eagle.

Kemble contended during his July 15 subpoena interview the money transfer was done to address collateralization issues so the money is protected. Regarding the transfer, the report states: “The Treasurer has allowed funds to remain undercollateralized periodically throughout this fiscal year at First National Bank of Pawhuska, placing funds at risk of loss.”

The Congressional report on the July subpoena interviews remains subject to further consideration and any action by the 12-member Congress.

Before approving the draft copy of the report, the Government Operations Committee amended it to include language stating the Congress could consider a removal process for Kemble as Treasurer.

In a written statement after the quash motion was filed Sept. 9, Chief Red Eagle said: “This matter also raises separation of powers questions… The Osage people, in approving our Constitution, vested certain powers in each branch of our government and one shall not exercise powers reserved for another. If I were to attempt to do some of the duties of the Congress, they would certainly protest… It’s time to let our tribal court do their duty.”