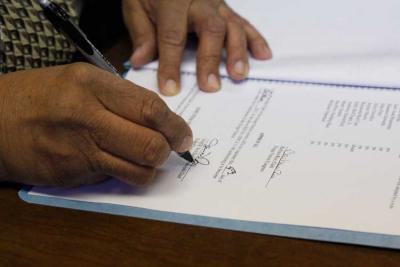 Delary Walters, who compiled the market raises and education credit bonuses for the merit system, is now the Nation’s Human Resources director. Her first day was Sept. 29. Former director Bill Foster remains in HR as a senior adviser. Clint Hill, who previously served as controller in the accounting department is now the HR benefits analyst.

Walters was originally hired as the compensation analyst during the summer and spent her time getting acquainted with the government system and worked with department directors in updating employee salaries for the merit system.

Walters said she started the salary adjustments by reviewing the employee job descriptions submitted by the directors and she used up to seven individual surveys to research salaries, which include Department of Labor statistics, payscale.com, and two tribal entities.

Walters said she used the Nation’s proximity location and size of organization to judge market raises. For example, she said “you can’t use ConocoPhillips (to measure against the Nation) because it’s a huge organization, you have to use one that’s normally your size.”

Market competition is also a salary consideration, she said.

Walters said if the survey recommends a salary increase to the current market rate, the salary amount at issue was increased to the minimum figure. If the current salary is above market value, that amount was frozen and no increase given.

In the merit funding bills, money is also designated to employees eligible for education credits based on their degrees earned. During the Congressional committee budget meetings, Walters said employees would be eligible for a percentage increase in pay with bachelor’s degree holders earning 10 percent extra; master’s degree, 15 percent; and professional degrees, 20 percent.

The merit employment system legislation (ONCA 10-85) calls for an employee protection council. “It will protect the rights of the employees… It’s going to empower employees to be a part of the process,” Walters said.

According to the merit presentation, plans for the employee protection council calls for two organization division leaders, the HR director and three non-management employees. Also according to ONCA 10-85, the HR department is charged with implementing a grievance procedure to create a formal channel of communication between management and employees to resolve work-related problems.

Walters said training on the Employee Protection Council is slated for Oct. 13. “The merit system is a continuous process, not a one-time event,” she said.

For the merit system, the Executive Branch proposed hiring seven division leaders which would be responsible for monitoring seven groups of divisions based on the services each tribal department offers. Those divisions are: Cultural, Preservation Arts, Heritage and Language; Child, Family and Senior Community Services; Health Fitness and Awareness; Properties and Housing; Education and Early Childhood Learning; Public Safety; and Office Administration Services.

Red Corn objected to the division leader position cuts noting things will not change in the government if the positions are not filled to address concerns of disorganization in some areas. He unsuccessfully motioned to change the number of division leaders to four.

During initial discussions on the merit system in the Congressional Committee on Government Operations on Sept. 20, Red Corn noted the current government system comprises one director of operations, currently held by Deidre Bigheart, who is in charge of most departments with those program supervisors reporting to her. The director of operations position will be in charge of the division leaders.

During initial budget talks in the Congressional Committee on Government Operations, Walters defended the division leader positions after Congresswoman Shannon Edwards referred to Bigheart’s role under the current government structure, stating: “Does she have time to put out fires all day? No, that’s the fire department.”

Walters said “just putting out fires all day does not make an organization run efficiently. Someone needs to be focused on the strategic plan.”

Congressman Mark Simms also disagreed the seven positions were needed. “We pour money into tribal programs each year, especially if grants are lost,” he said of the Nation supplementing money when state or federal monies are cut. “If these directors can’t manage and put out fires in their own programs, there’s something wrong.”

On Sept. 30, the Congress passed ONCA 11-95 which is the bill providing the FY 2012 merit pay adjustments and bonuses for the Executive Branch governmental departments and programs – one day after hearing concerns over protesting employees who opposed a proposed cut to the merit bonus budget line item. The bonus money will not be awarded until employee job evaluations have been conducted.

Edwards withdrew the amendment before the final vote on Sept. 30, which was passed by the 11 Congress members present and one absence by Congressman Archie Mason.

Before the merit funding bill vote, Congressman Geoffrey Standing Bear addressed members of the public who are critics of the merit system and its funding. “I know there’s criticism out there,” he said. “(The critics) don’t see a lot of the employees in action – either that or they’re not paying attention. I’ve been very involved in (some local) families’ personal issues (as an attorney). I can tell you if these people are not allowed to be paid a decent salary… we have to spend more money on social programs and the court system and that means more government spending.”