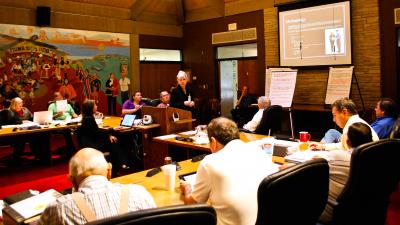 After facing Congressional budget meetings and debate, the Chief’s budget (ONCA 11-88) was amended to include $19,047 in pay for performance pay for his office’s appointed staffers. This amendment adds a 4 percent increase in salary for those appointees who have worked in the Chief’s office for over a year, Atterberry said.

In accordance with ONCA 10-85 (Merit Pay for Performance law) and the Constitution, the Nation’s elected officials (in all three branches) will not be subject to the pay for performance compensation system. The salaries for Chief Red Eagle and Assistant Principal Chief Scott BigHorse will remain at $95,000 and $71,250 respectively in ONCA 11-88.

Congressman Eddy Red Eagle (who is sponsor of the merit funding and FY 2012 budgets) said the 4 percent increase to appointee salaries were “done in the spirit of compromise” as earlier salary amounts were debated.

According to ONCA 10-85, the Chief’s Executive staff employees are exempt from the pay for performance system, but they are eligible for an annual bonus at the discretion of the Chief.

During the Sept. 30 session, Congresswoman Edwards objected to ONCA 11-88, stating she believed “there’s too much fluff in it… I’m pushing for progress, I’m pushing for uniformity – this is about running an office. These people are supposed to be advisers to the Chief… I don’t think this is the best use of the money, so I will be voting no.”

ONCA 11-88 passed with eight “yes” votes while Edwards and Congressman Daniel Boone voted “no.” Congressman Archie Mason was absent that day for a medical condition.

The salary amounts totaling the $31,500 amount is for the mid-point amounts of the staffers’ salaries, said Red Corn who is Second Speaker and chairman of the Congressional Affairs Committee, which considered the salary adjustments in a 9 a.m. meeting held just before the day’s session.

The Congress approved the mid-point salary adjustments after discussion and debate. In his Update e-newsletter on Oct. 4, Red Corn addressed the vote on the legislative employee salaries. “We did not take this matter through the Human Resources department, nor did we consult any other authority on the raise,” Red Corn wrote. “This raises a key question: if Congress doesn’t, why should Executive? Can’t they then make the same non-process decisions without the input of the Human Resources department?”

The Congress considered the salaries with several members noting the staffers worked under dire conditions during the Tzi-Zho Session with one staffer quitting just after the session started Sept. 5 and another temporary staffer was sidelined due to injuries received in a car accident.

The Tzi-Zho Session ended its 24-day run on Oct. 3, but the session was extended through Oct. 6 for an additional three days.