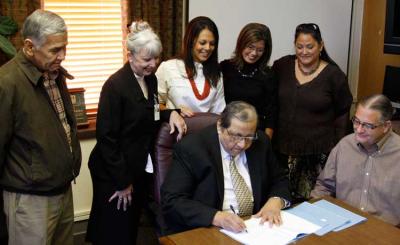 Five years in the making, the Merit Pay for Performance is mandated in the Osage Constitution and was one of the initiatives in the Osage Nation Strategic Plan that Osages from all over the country wanted to see implemented for Osage Nation employees when the new government was formed in 2006.

“One of the five stated priorities in this administration was to work on the development and improvement of our internal governmental operations and the employment conditions,” Chief Red Eagle said. “The Merit System is a system that can bring improvement to the Nation’s employment conditions… We have taken a huge step toward creating a system that brings structure and consistency to future and present employees of this Nation and now the real work begins for the Executive Branch.”

The Second Osage Nation Congress completed passing legislative bills on Sept. 30 to fund the Merit System for the governing entities for the 2012 fiscal year – one day shy of the new fiscal year.

Amid Tzi-Zho Session debates and concerns from both the Executive and Legislative branches about the merit system’s implementation process, and who will benefit from it, the legislation bills passed. Approximately 500 people work for the Nation’s government.

Assistant Principal Chief Scott BigHorse also praised the Merit System bill signings, noting the updated system could keep employee retention low. “My desire is to create an environment that will attract our brightest and best Osages to work for the Nation and to retain them.  I believe this is a huge step in that direction,” he said.

The merit funding bills (ONCA 11-95 through 11-99) are appropriations to raise government employee salaries, especially those currently paying under market value, to more competitive amounts. The merit bills also authorize education credits to the Nation’s approximately 500 government employees (based on their most recent education degrees completed) as well as bonuses - subject to an employee job evaluation process first.

On Sept. 21, Executive Branch officials held a nearly 40-minute presentation in front of the Congress to inform the members of the system implementation process to defend and justify the appropriation requests for merit system funding. Earlier in the Tzi-Zho Session, Congress tabled the merit funding bills and requested more information about the merit system first.

In her presentation to the Congress on the merit system, Chief Red Eagle’s Senior Adviser Debra Atterberry described the merit system as “a solid foundation” with four cornerstones.

She said those cornerstones are: the merit system mandate in the 2006 Constitution; the 2010 merit system law (ONCA 10-85) passed by Congress after previous efforts to pass a merit system law failed; The revamped Human Resources Department created by ONCA 10-85; and “the right organizational structure with the right people.”

Atterberry defined a pay-for-performance system as a pay strategy where the employee and/ or organizational performance has significant influence on the amount of pay increases or bonuses given to each employee. She also noted that no merit system is perfect as she encouraged the Congress to pass the merit funding bills to avoid further delay of a system implementation.

Previous bills to implement a merit system failed during the First ON Congress when Atterberry served as Congresswoman.

“We can’t wait for the ideal organizational culture to be present before merit implementation,” Atterberry said. “Nothing that is born comes into this world without pain.”

On Sept. 12, Congress discharged the five merit funding bills from their respective committees of jurisdiction and sent them to the main floor pending further Congressional action and the eventual Sept. 21 presentation.

In his Sept. 11 Update electronic newsletter, Congressman Raymond Red Corn emphasized the Congress needs to make sure the merit system is implemented to answer past issues in working for the government.

“The promise of a Merit system, mandated by the Osage Constitution, is an answer to decades of cronyism on the hill,” Red Corn wrote. “It should, to the extent feasible, protect employees (or at least their rate of pay) from the whims of superiors – all of them - and offer some sense of fairness where wages and salaries are involved.”

“If the system about to be installed doesn’t do that,” wrote Red Corn, “this government will lose the confidence of our workforce for the foreseeable future and beyond, resulting in lower morale, higher turnover, and lowered potential to attract the best and brightest to open positions. Our employees deserve a system they can trust will be fair, not a system still subject to the whims of superiors.”

[Editor's Note: This story was updated for clarification Oct. 4, 2011]