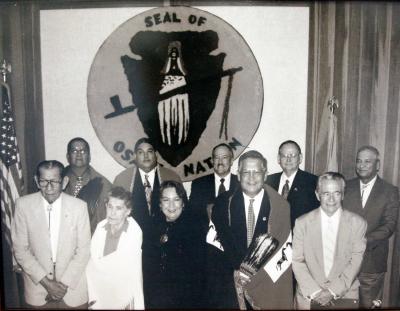 Former Osage Principal Chief Charles Tillman knew something was wrong when the Bureau of Indian Affairs was missing 67 percent of the documentation on the Osage Minerals Estate from the 1972 to 1992 accounting period.

Tillman, who recently turned 74-years-old, was elected Principal Chief in 1990, right around the time Eloise Cobell was filing her lawsuit against the U.S. Government for mismanagement of Native oil royalties. Tillman said when he and the 28thOsage Tribal Council came into office, they were told that an audit was being performed at the BIA Osage Agency on the Osage’s oil and gas records.

“What brought that on was the Cobell case,” Tillman said. “We didn’t know there were discrepancies with the [Osage] records until [the auditor] decided to pull out of the Osage audit.”

The auditor discovered that the Osage Agency was in shambles, records were everywhere, spread all over the country, and especially drawing their attention were six years of records missing during a 20 year span – from 1972 to 1992, roughly 67 percent of the records for that accounting period, according to Tillman.

Upon discovery of the discrepancy, Tillman and the council decided to take action.

“We had to look into that and see what was wrong here, under federal law, because we understood if we look at the records the records consisted from 1897 all the way up to the present time, which was 1990,” Tillman said. “We knew [the auditor] took the best accounting period – which was from 1972 to 1992 – so they would have an easier time getting to the records. Well, if they had problems from 1972 to 1992, what about 1900 to 1920? It would be worse. So, we thought we had to do something, because at that time we were the Osage Tribal Council and also the trustee, part of it in joint with the BIA, it was our responsibility to do something, which we did.”

Ten years after initially discovering the BIA mismanagement in 1990, Tillman and the 30th Tribal Council filed two separate suits against the United States in 2000. The first suit was on the mismanagement of the minerals estate and the second was on the highest posted price. The Highest Posted Price lawsuit sought damages from the BIA for allowing Osage oil to be posted at a lower price, allowing oil purchasers to buy oil up to $2.30 less per barrel, Tillman said.

From 1990 to 2000, Tillman and the 28th, 29th and 30th tribal councils hired and worked with Oklahoma City-based attorney Bradley Brickell.

“The reason why [Brickell] was hired was he had just represented a royalty owner in Texas and whipped Exxon Mobil and he represented this Texan and got millions of dollars,” Tillman said. “Plus he’s a litigator and an oil and gas law expert.”

Brickell came on board and assembled a team of oil and gas experts.

“We had three problems, one was with the government. [The auditor for the Osage Agency] would not release the records to us and we needed those. Second, some of our storage was in the old council building, down in the basement, we had some records stored there. But also, some of those records were intentionally burned,” Tillman said. “They were burned by the Bureau of Indian Affairs, in an old incinerator that was outside the [Indian Health Service] building, there’s a lot of Osage people that saw that at the time and went out and got some of those burnt records and we still have some of those – some still have them in their safety deposit boxes.”

The third problem was to identify where the Osage oil and gas records were. The U.S. government told them there were records stored in Ft. Worth, Texas; St. Louis, Mo., and New Orleans, to name a few.

“[The Brickell firm] had to go search, literally, go through boxes and boxes of [data] that pertained to this oil and gas mismanagement,” Tillman said. “But we did all these things, and all the work [the attorneys] put in on this got us ready to file the case.”

According to Tillman, the Brickell team presented a summary of evidence to the U.S. Department of Justice in Washington, D.C. in the spring of 2002.

The Deputy Secretary at the time, Steven Giles, stated he wanted to start settlement discussions as soon as possible and did not want to go to trial, Tillman said.

Tillman said the meeting with Giles was the last action he and the 30th Tribal Council took on the case. And the last settlement number they discussed was $2.5 billion.

But time ran out, he said, and the election in June of 2002 brought a new chief.

A new chief and new counsel

In 2002 an Osage Election took place that changed the course of both lawsuits. Tillman lost his bid for reelection when Osage shareholders elected Jim Gray. At 40-years-old, Gray was the youngest person to be elected chief in Osage history.

“We switched attorneys . . . it wasn’t based on any other reason but for the case this size, that possessed the potential that it did, there was no other way we were going to possess the victory that we had with the resources the 31st tribal council put in there,” Gray said. “This was before we had gaming money.”

The law team merged the mismanagement case and the highest posted price case into one – under recommendation from Federal Judge Emily Hewitt, who was assigned the case in 2005. Judge Hewitt said it would be easier in her court, said Gray and both cases then became the Osage Trust Case.

“No disrespect, to the former counsel and former chief,” Gray said. “It was the entire wish of the 31st council to change legal teams.”

“It became a matter of, ‘who could demonstrate both the legal and political expertise to carry a case like this to victory even though it may take years to litigate,’ especially under a contingency agreement? The combination of Akin Gump and Pipestem presented an easy answer.”

The Osage Trust Case was filed in the U.S. Court of Claims placing the burden of proof with the tribe.

“The Court of Claims allows claims to be brought against the U.S., but the burden of proof falls on the plaintiff. That means the Osage had to prove their case,” Gray said. “Which we did in my administration.”

When the new government was passed in 2006, Gray and government officials were tasked with integrating the ongoing litigation under the new Osage Constitution. The creation of the Osage Trust Team was established, with three members of the Minerals Council and single representatives from the Nation’s legislative and executive branches.

“We ensured the court and our opposition that the Nation was united in its effort to win this case, plus,” Gray said. “We were defending ourselves from those who sought to divide our people by filing motions to intervene or defending motions from the U.S. to say we didn’t have standing. We successfully overcame those issues and continued to prosecute this case with our new government intact.”

Gray said he knows that there was a lot of confusion during that time and a lot of misunderstandings are still out there about his administration’s intent.

“I know a lot of people didn’t understand at the time why we did it, but our only goal was to set it up in such a way that the minerals council representatives would always be in the majority, to provide the strategic legal direction of the case while the Nation’s representatives would provide legal/political cover to fight back claims the Minerals Council did not have standing to file this case,” Gray said. “The Osage tribe/nation was the plaintiff and under federal law the shareholders were the beneficiaries of that settlement. Nothing in the new Osage government was going to change that fact.

“I took a beating politically over that, but I was more concerned about winning the case then winning an election,” Gray said.

Gray was aware of promises made of settlements ranging in the billions from the previous administration, which he attributed to “imagination at work.” He told the Nation’s attorneys not to oversell the settlement because he would rather be guilty of under-promising than promise too much.

“[President Barack Obama’s] election was a huge impact on the future of the settlement,” Gray said. “Thank God we got that judgment on Tranche One last year because that set the ground work for the settlement.”

Gray was chief for eight years of the Osage Trust Case, in which he quipped, “Eight years on the case – in dog years, it was more like 56.”

During the course of Gray’s tenure as Chief, he said he accepted several appointments that put the Osage’s tribal interest in settlement and trust reform on boards that were working on the issue from both a political and legal level.

Gray served as a member of the Board of Director of Native American Rights Fund, (2003-2007), Office of the Special Trustee Advisory Board, (2002-present), Elected to three terms as Chairman of the Inter-Tribal Monitoring Association on Indian trust funds, (2004-2006) and he was Co-Chairman of the Cobell Settlement and Trust Reform legislation at the request of Sen. John McCain (R-Arizona) and Sen. Byron Dorgan (D-North Dakota), (2004-2006).

Senator McCain and Senator Dorgan introduced Cobell Settlement and Trust Reform legislation based on input from the Osage Nation. They were separate settlement agreements estimated at $7 billion, with the Osage getting a significant percentage of that $7 billion, Gray said. Unfortunately, the Bush Administration did not support the bill and the legislation died.

The Osage people elected John D. Red Eagle in 2010 as the new Osage Nation Principal Chief. That same year Osage Congressman Archie Mason stepped down as Speaker of the Congress (he was on the trust team for four years) and was replaced with Congresswoman Jerri Jean Branstetter. The Osage Minerals Council also held their election in 2010, with Councilwoman Cynthia Boone the only previous council member winning their reelection bid.

“In the negotiations process, what I was concerned about was – were we going to reach the number that we really wanted. I am happy to say that we did,” Red Eagle said in the release. “As a result of these meetings, we reached a settlement in the amount of $380 [million]. Regarding the settlement, I feel that the Osage shareholders received the best amount we could possibly get.

“The settlement is a significant achievement. There are about 80 trust cases in the Court of Federal Claims and we are the first tribe to reach a settlement with the government,” he said. “I wish to credit and praise the considerable contributions of the Minerals Council trust team, Speaker Jerri Jean Branstetter, Principal Chief Tillman, Principal Chief Gray and the 30th and 31st Tribal Councils, without whose efforts this settlement would not have been possible.”