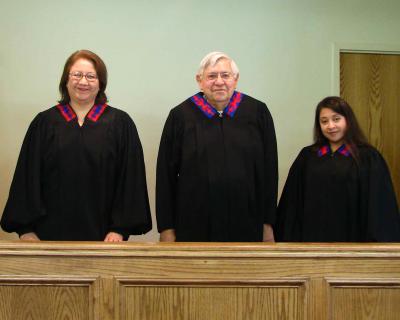 After several medical tests and scans, doctors diagnosed the 77-year-old Osage with lung cancer in March. A malignant tumor was discovered in the upper lobe of his left lung. Lohah said the cancer has spread to his side lymph nodes, but the cancer did not reach other organs.

Now, a first-time cancer patient, Lohah and his family considered treatment options such as radiation. They also considered that radiation therapy may harm his body as much as the cancer did.

At that time, “I thought: ‘I don’t want to go for standard radiation treatment,’” he said, referring to X-ray radiation therapy, which could impact organs unaffected by cancer. The timing of the cancer discovery (before spreading further) and treatment research went in Lohah’s favor. He opted for proton therapy: an advanced form of radiation treatment which targets only the tumors in specific types of cancer.

Proton therapy radiation is controlled to treat the areas where cancer is present. Therefore, proton therapy reduces the risk of harming unaffected organs and side effects, such as nausea and vomiting, typically seen in patients undergoing X-ray radiation treatment.

Lohah, who was appointed to the Osage Nation Supreme Court in 2006 was retained by popular vote in the 2010 election. He has remained humble about his cancer treatment and in a recent visit with the Osage News he said, “I’m not trying to draw attention to myself, but would like to inform other Osages of this treatment.”

Proton therapy radiation is offered at less than 10 facilities nationwide, with the closest at the ProCure Proton Therapy Center in Oklahoma City. After his diagnosis, Lohah started seeing Dr. Sameer Keole, a radiation oncologist at the center.

“He did quite well with the treatment,” Keole said of Lohah. “To treat him with conventional radiation would have been difficult.”

“Proton therapy treatment is more like a fire cracker. It goes to the area at risk and you give the dose,” said Keole who joined the Oklahoma City center in 2009 when it opened. To date the center has treated more than 500 patients and can have up to 70 patients treated at the center on any given day, he said.

According to the National Association for Proton Therapy, a major advantage of proton treatment over conventional radiation treatment is the distribution of protons that can be directed and deposited in affected tissue designated by doctors in a three-dimensional pattern from each beam used. This provides greater control and precision in treatment.

The NAPT’s Web site also states: “If given in sufficient doses, X-ray radiation techniques will control many cancers. But, because of the physician's inability to adequately conform the [application of radiation] pattern to the cancer, healthy tissues may receive a similar dose and can be damaged. Consequently, a less-than-desired dose is frequently used to reduce damage to healthy tissues and avoid unwanted side effects. The power of protons (in proton treatment) is that higher doses of radiation can be used to control and manage cancer while significantly reducing damage to healthy tissue and vital organs.”

“We have nine centers in the country,” Keole said.

Treatment is an average of six to eight weeks straight, depending on the patient’s cancer.

Lohah underwent treatment at the center for eight consecutive weeks. His treatment sessions lasted 30 minutes to an hour during the five-day per week visits. Lohah said he did not feel any side effects until after the last two treatments, which required larger doses of treatment. He said he felt fatigue, but did not get nauseated or have a loss of appetite.

“I guess I got a strong stomach,” he said.

Amid feeling fatigue, “I’ll get over it as soon as I get this crap out of me,” Lohah said with a smile.

“So far early signs are positive, we’ll be seeing him regularly,” Keole said. Lohah is due for a follow-up visit on his treatment later this month.

Lohah’s wife Janet Lohah joined him during the treatment sessions and consultations.

“We went to college together in the 1950s, we were best friends. She’d hear things I didn’t hear,” Lohah said of his wife and her help with his treatment consultation.

Lohah’s daughter, Elizabeth Homer, also praised her father’s progress. “He’s really come through his treatment like a champ,” she said. Homer, who visited the ProCure center where her father was treated, praised it for its “hospitality and kindness. I felt it was really a healing place, they take a lot of stress away.”

“He’s had health issues before (including diabetes), I think he’s come through it really easy, we definitely welcome everyone’s good thoughts and prayers,” Homer said.

Lohah, a University of Tulsa law school graduate who also served in the Oklahoma Air National Guard and Air Force Reserve, has worked as an attorney and judge for county and tribal government entities. He has served on several boards and commissions including the Native American Rights Fund and worked as a college law professor.

Retired since 1997, Lohah was appointed to the Osage Nation Supreme Court in 2006 with fellow Justices Jeanine Logan and Meredith Drent. All three Justices were retained in the 2010 election.