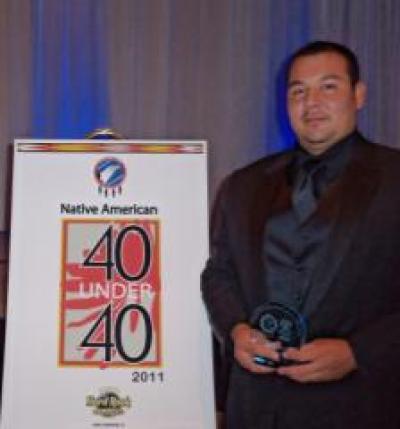 Berbon Hamilton is recipient of ‘40 under 40’ award

Berbon Hamilton, General Manager of Osage Innovative Solutions, LLC, is a 2011 recipient of the “40 under 40” award from the National Center for American Indian Enterprise Development (NCAIED).

Hamilton was honored at the 36th Annual Indian Progress in Business Awards Event (INPRO) on Sept. 8 at the Seminole Hard Rock Hotel & Casino in Hollywood, Fla.

The Native American “40 Under 40” recognition was incorporated in 2009 as part of the National Center’s 40th Anniversary and highlights 40 existing and emerging American Indian leaders under 40 years of age who have demonstrated leadership, initiative and dedication to achieve impressive and significant contributions in their businesses, communities and to Indian Country, according to a prepared release.

“I am extremely humbled to have been selected by my peers for this prestigious award from one of Indian Country’s most influential and longstanding organizations supporting Indian businesses,” Hamilton said. “It is my goal to continue along the career path that I have chosen and to always bring honor to the Osage Nation in whatever I set out to accomplish.”

Hamilton graduated from Tulsa East Central High School. He received a bachelor’s degree in business administration from Haskell Indian Nations University in Lawrence, Kan. Prior to becoming general manager at Osage Innovative Solutions, a subsidiary of Osage LLC, he was general manager of Osage Data from 2005 to 2010.

“All of us at Osage LLC congratulate Berbon on this important achievement,” said Osage LLC CEO Carol Leese. “We are very proud of him – his success is also our success.”