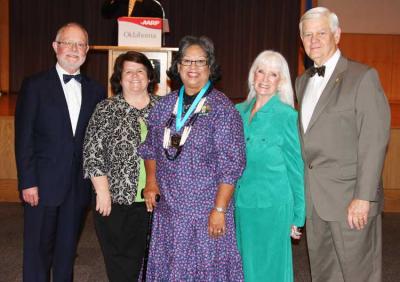 When Martha Spotted Bear and JC Elliot reflected on their lives, they were just two people doing what they love. But to a room filled with people whose lives they touched, they were a pair of the most distinguished Native American elders in Oklahoma.

Spotted Bear, who is Osage, Kaw and Ponca, and Elliott, who is Osage and Cherokee, were the only Osages out of 50 Native American elders honored at the third annual 2011 AARP Oklahoma Indian Elder Honors banquet in Oklahoma City on Tuesday.

Spotted Bear said the caliber of the award didn’t hit her until she sat and listened to the stories of her peers who were also being honored.

“I really didn’t get excited until I got down there, it wasn’t like it was real to me,” Spotted Bear said. “I kind of looked around at the people sitting next to me and thought ‘oh my goodness, they are so much more worthier than me,’ they’ve done so many wonderful things and I got to be with them.”

She was worthy and so was Elliott.

The award ceremony was held at the National Cowboy and Western Heritage Museum after a catered buffet-style dinner and a list of speeches from AARP officials.

Spotted Bear, 64, has lived in Indian Camp all her life. She has served as a committee cook for the Pawhuska District for 12 years. She was recognized for her 30-plus years teaching for the Osage Nation Head Start and for volunteering as a PE teacher. She was also the first Native American to receive her Child Development Associate.

She was also a Master Teacher who was in charge for all the cultural teachings in various entities of the tribe. She continues to hold workshops where she shares her Indian stories with children.

Elliott, whose mother was Osage and Cherokee and father who was Cherokee, was perhaps one of the most embellished honorees at the ceremony.

He was the first Native American to earn a physics degree from the University of Oklahoma and is a retired physicist from NASA’s Johnson Space Center in Houston.

He played a key role in the flights of the Apollo Moon landings and the return of Apollo 13, as lead Retrofire Officer for NASA’s Mission Control Center.

Elliott is also credited with three scientific inventions during his professional career. He is also a producer, director, composer, play write, poet, author, entertainer, recording artist and storyteller. He was awarded the Presidential Medal of Freedom by President Richard Nixon.

Keynote speaker John Penn, who serves on AARP’s National Board of Directors, said in his speech that after reading about each of the honorees he was overwhelmed by how dedicated the honorees were.

“The men and women who are receiving the medallions today have distinguished themselves through their accomplishments, their commitment, their perseverance for the greater good of Indian nations and our collective nation of the United States,” Penn said. “All are keepers of Native American traditions and continue today to make contributions to all Americans…”

Spotted Bear attended the event with some of her family. She said two of her grandsons were unable to attend but on her purple camp dress she wore a pin with a picture of her Army grandson Jeremy Spotted Bear, who is serving in Afghanistan.

She said she has always made a point to include her family in just about everything that she does.

“I have never done, and don’t do anything, without my family,” she said. “ He’s my hero, that’s how come we’re so free to be here to tonight.”

Spotted Bear had the support of her husband, Fred Spotted Bear and her 18 grandchildren and 20 great-grandchildren, most of who could not make the event She also made room on the table for a picture of her military grandson.

She said even though she was one of the 50 being honored she couldn’t help but be in awe at all the other honorees.

“To be in that one room, we’re talking about people who’s way up there, who’s kept our tribes going in one way or another, they have made their mark for their tribe,” she said. “It’s an impressive view if you sat there and looked at each one of them and it didn’t just happen overnight, these people, it was their life.”

Spotted Bear said by the end of the evening she was convinced that she belonged with the group of 50 and was happy to be a part of the celebration.

“It was just a blessing to be there,” she said.

Elliott was also modest about being a recipient.

He moved from the Smokey Mountains of Tennessee back to Oklahoma after the recent death of his mother. He said the award was a nice reminder of those who did much more before him.

“I don’t know why I deserve this honor because I don’t feel like an elder and I want to accept this honor not in my name but on behalf of all our families our ancestors and our relatives who came before us, who died and sacrificed and gave all so that we can be here today,” he said. “They are the ones who deserve the honor but I accept it in their name.”

He said it’s been years since his last visit to Osage Country and hopes to make a trip soon.

He said his Osage ties are important to him and are significant in the award he received from AARP.

“A lot of the people I know have passed on now, Ed Red Eagle, Sr., was my mentor and John Mathews, I miss everybody and I’d like to see them again,” he said.  “I want to get back up and go to the In-Lon-Schka and feel my roots again, I need to reboot and get back to our people.”