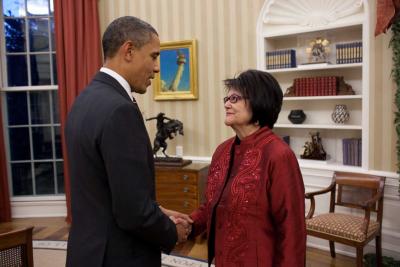 Elouise Cobell, an enrolled member of Montana's Blackfeet Tribe who led a 16-year landmark legal fight to get the federal government to pay an estimated 500,000 Native Americans for mismanaging their trust accounts, died Sunday night at Benefis Hospital in Great Falls, Mont.

A great granddaughter of Mountain Chief, one of the legendary Indian leaders of the West, she had been diagnosed with cancer weeks before her class-action lawsuit was given final approval by a federal district judge in Washington on June 20.

Born on the Blackfeet Reservation on Nov. 5, 1945, with the Indian name Little Bird Woman, Ms. Cobell was one of eight children.

In 1996, Ms Cobell and four other Native Americans filed a lawsuit against the federal government demanding that the government give Native Americans an accounting of billions of dollars it received for oil and gas leases and other uses of individual Indian lands held in trust by the United States.

After a long, tenacious fight with the government, the Obama administration agreed to settle the lawsuit in December, 2009, creating a $3.4 billion fund to, among other things, make payments to individual Indian money account holders.  This was the largest class action settlement with the government in American history.

After finding government records of the Indian accounts inadequate to support an accounting of all items of the Individual Indian Trust, a federal judge declared the Indians could never receive a full accounting of their funds and other trust assets.  He then urged the parties to engage in direct negotiations at the highest levels, negotiations that led to the historic settlement.  The settlement was ratified by both Houses of Congress and approved by the President of the United States.  It then went back to the United States District Court for the District of Columbia for final approval and judgment, which was entered on August 4, 2011.

Ms Cobell served as lead plaintiff in the lawsuit and tirelessly led the effort from Browning, quietly raising millions of dollars for expert witnesses and other major costs associated with the litigation.

In part, Ms. Cobell used funds from her own 1997 "Genius Grant” from the John D. and Catherine T. MacArthur Foundation's Fellows program to fund the cost of the lawsuit.

In 2005, she received a Cultural Freedom Fellowship from the Lannan Foundation, an award that cited her persistence in bringing to light the “more than a century of government malfeasance and dishonesty” with the government-run Indian Trust.

Two years later, she was one of 10 people given an AARP Impact Award (for making the world a better place), and in 2004 the National Center for American Indian Enterprise Development presented her with the Jay Silverheels Achievement Award.  This year, she was named "Montana Citizen of the Year" by the Montana Trial Lawyers Association.

She received the 2002 International Women’s Forum award for “Women Who Make a Difference,” in Mexico City.

With her husband, Alvin Cobell, she operated a working ranch that produced cattle and crops. She was active in Montana agriculture and environmental issues, founding the first Land Trust in Indian Country. She also served as a trustee for the Nature Conservancy of Montana.

She graduated from Great Falls Business College and attended Montana State University, from which she later received an honorary doctorate. She also has honorary degrees from Rollins College and Dartmouth College.

Statement by President Obama on the Passing of Elouise Cobell

"Michelle and I were saddened to hear about the passing of Elouise Cobell yesterday.  Elouise spoke out when she saw that the Interior Department had failed to account for billions of dollars that they were supposed to collect on behalf of more than 300,000 of her fellow Native Americans.  Because she did, I was able to sign into law a piece of legislation that finally provided a measure of justice to those who were affected.  That law also creates a scholarship fund to give more Native Americans access to higher education, and give tribes more control over their own lands.   Elouise helped to strengthen the government to government relationship with Indian Country, and our thoughts and prayers are with her family, and all those who mourn her passing."

The Osage News also contributed to this report.