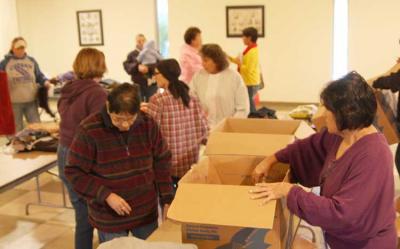 In the small catholic church hidden in Fairfax a dozen women gathered shoes, jackets, socks, diapers and anything else they could find and packed them into brown boxes bound for South Dakota.

The women, members of the Sacred Heart Catholic Church and the Pah-Sue-Lee Club, decided to take action after a discussion about ABC’s “20/20” special, “The Hidden America: Children of the Plains,” aired on Oct. 14. They decided to collect clothes and anything else they thought the Native American children and families in South Dakota might need.

Millions of viewers, 4.74 million to be exact, tuned in on the 40-plus minute show that showed viewers the lives of a group of promising children and the daily battles they faced while living on the Pine Ridge Reservation.

At least 12 of those viewers were women like Beverly Brownfield.

Brownfield, Osage, a member of the church and the president of the Pah-Sue-Lee Club, heard about the segment and wanted to do something. Brownfield has also been to the Pine Ridge Reservation, as well as Rosebud Reservation.

“I’m aware of what the situation is in that area, I’ve been up in that area, I have some friends from up there that we’ve adopted down here in our area, and so I know what its like up there,” Brownfield said. “Some of the girls got to talking about it and they said they would like to do something for those people up in Pine Ridge and Rosebud.”

Just five days after the segment aired, the group met and a week later were boxing necessities on Oct. 26.

Hadlock, Osage, who lives in Fairfax, said she didn’t hesitate and started looking through things her family no longer needed.

“Just clean the closets, coats, and gloves, this time of year I think they need coats, and jeans, and shirts and just whatever we could give them,” she said. “They need help, I watched the program on 20/20 and my heart went out to them, and I just wish we could do more.”

Hadlock is a mother of three children, including a son who is around the age of Robert Looks Twice, the 13-year-old who dreams of becoming the first Native American president.

She said when she saw how passionate and intelligent he was it had a heavy impact on her.

“It was sad but the people have so much spirit, drive, to be so unfortunate but to be so lucky and blessed,” she said. “This is wonderful that we’re doing this, I wish we could do more.”

Sidonie Cannon, also from Fairfax and has a degree in social work, said she too has visited the Pine Ridge Reservation and has known the conditions for some time.

She was introduced to various organizations that collect donations from people all over the country for the Native peoples in South Dakota.

She said it’s time tribes like the Osage Nation lend a hand and help those neighboring nations.

“I just know that the Osages have been blessed throughout the years with an abundance and we need to share our abundance,” she said. “(It’s) very humbling to know that other people have so much and they have so little.”

Cannon found the addresses of places where care packages or donations can be sent on ABC’s Web site and on Facebook.

Brownfield said the Pah-Sue-Lee Club donated money for shipping costs and so did others.

Brownfield said her children bought and donated items and Julie Mushrush bought and sent diapers because there was a need for infant and toddler clothes and supplies.

Brownfield said it was good to see members of the community help out where they could.

“It’s a community effort,” she said. “It’s extremely poor, you hear that over the news all the time, but it doesn’t seem like they get a lot of help, I’m not sure why, I don’t understand that part of it at all, but we just wanted to do something as a community.”

While boxes filled the church that afternoon Brownfield said the women helping weren’t exactly sure what kind of an impact they would have.

But whatever the impact, they’re happy to be able to help.

The women of the Catholic Church plan to send more care packages soon and will continue to take donations of any kind.

To make a donation email Sidonie Cannon at sidscannon@yahoo.com.