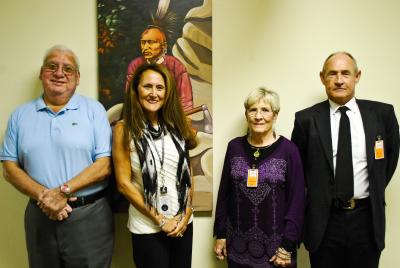 Concerns raised over changes made to Osage Gaming Enterprise Board

The Osage Nation Gaming Enterprise Board is undergoing changes after the Second ON Congress passed legislation during the Tzi-Zho Session to expand the board to five members and remove some of its managing authority. The legislation also places the GEB with Osage Casino management staff.

Congress voted, by majority, to expand the three-member board and passed separate legislation items during the Tzi-Zho Session to amend the board’s duties, some of which include seeking legal counsel representation. In the wake of the changes, gaming board Chairman Frank Oberly resigned from the gaming board. Oberly had no comment.

Principal Chief John Red Eagle has since appointed Candy Thomas (Osage) and Randy Carnett to the gaming board with a fifth spot to be filled. The new gaming board appointees will be subject to Congressional confirmation during the next regular Congressional session next year.

During the Tzi-Zho Session, Congress passed ONCA 11-103 (sponsored by Congresswoman Shannon Edwards) to expand the board to five members. But ONCA 11-79, to remove the gaming board’s authority to hire outside legal counsel, and ONCA 11-82, to remove the board’s authority to manage the Osage Casino enterprise and place management with the casino management staff, caused some concern.

Congressman Raymond Red Corn, who opposed ONCA 11-79, took concern with the bill, which passed with a 6-5 vote on Sept. 27. He said the result would be that the gaming board would have to consult the Chief’s office for legal counsel.

In his Sept. 16 Update email newsletter, Red Corn wrote: “Recall that the Osage constitution [sic] prohibits (those elected to executive and legislative branch offices) from sitting on any Enterprise Board. Yet this law puts the Principal Chief squarely in a day-by-day decision making capacity with his/her hand on the valve that allows legal counsel to flow to the Enterprise Board. It follows that in such an arrangement, the nature and quality of that counsel could be controlled by the Office of the Chiefs, and therefore easily politicized.”

Congressman Geoffrey Standing Bear (who sponsored ONCA 11-79) addressed the bill in Congressman William “Kugee” Supernaw’s Sept. 18 Notes to the Nation newsletter stating he wanted to cut spending on outside legal and consulting fees.

“It appears to me that there has been no comprehensive legal and policy strategy for the Osage Nation, yet consultant and attorney fees are rampant expenses throughout the Osage Nation government and enterprises,” wrote Standing Bear. “The Gaming Board is part of the Executive Branch so it makes since for (ONCA 11-79’s purpose). Additionally, the Chief has access to attorneys with many years experience in Indian gaming and who are local attorneys. Yet, there is a long way to go.”

One immediate effect of ONCA 11-79’s passage, the gaming board must part ways with Washington, D.C.-based attorney Elizabeth Homer (Osage), who was the board’s chairwoman last year until she and former board member George Pease weren’t confirmed by the First ON Congress. Shortly after she wasn’t confirmed, she was hired to be the board’s attorney via contract and handled the Nation’s efforts to put all lands with gaming operations into trust.

Homer said she had no comment on the bill’s approval. Before founding her own law firm, Homer served a three-year term on the National Indian Gaming Commission.

On the bill ONCA 11-82, Red Corn said he opposed it because it has potential to dilute accountability of the gaming board which has managed the $150 million-plus gaming enterprise for the Nation.

“As the Board has historically managed the enterprise, most actions regarding management of our casinos are reviewable,” Red Corn also wrote in his Update. “But what if – by Congress’ own action - the management function is pushed downstream to the employees? What if, as this law intends, the Board is left only with strategic vision, policies and procedures, and goal-setting? Will only those types of actions be reviewable? The Congress does not have any constitutional right to review actions taken by senior management.”

Red Corn also noted that Osage Casino management officials were not consulted regarding the shift in management duties, which came up during the gaming board’s Oct. 13 meeting – the first one for the four board members together.

Osage Casino CEO Neil Cornelius raised questions about the legislation and where the managing operations should go in moving forward.

“I sense the winds of change,” Neil Cornelius said of the gaming-related legislation at the board meeting. He said he would like assistance in moving forward with operations and requested a legal analysis as a guide.

Cornelius also questioned what the legislation means, but no response was given. “The board is to now provide oversight – what does that actually mean?” he asked. He also questioned why the board changes were made because “we have a fine relationship, I don’t see a big reason to change a lot of things.”

Congressman Mark Simms, who did not reply to an Osage News comment request, sponsored ONCA 11-82 and did not attend the meeting.

At the Oct. 13 meeting with the four board members, members of the Executive Branch, Attorney General Jeff Jones and Executive Branch attorney Terry Mason Moore, a decision was made for a meeting involving casino officials and the two attorneys to discuss the attorney issue for the board and casino operations. A timeline for the meeting was unknown.

A Gaming Enterprise Board meeting slated for Nov. 10 was cancelled on Nov. 8. A new meeting date has yet to be announced.