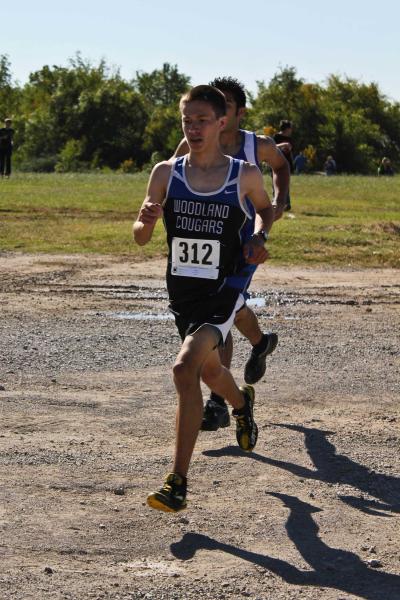 Neither do his facial expressions or his body language.

But when you give the 15-year-old Woodland cross-country runner a pair of running shoes and an open trail, his energy explodes.

“He’s probably the quietest person you’ll ever meet,” his coach Paula Tiger-Martinez said. “Except when he gets to the finish line he just shows it, he turns on his true demeanor.”

Although he may be shy, the small-framed kid from Fairfax, has quietly made a name for himself in Oklahoma’s high school running world.

On Oct. 22, Roger’s finished fourth with a time of 17:27 in the 2011 2A state cross country meet at Oklahoma Baptist University.

Rogers is a runner, and he has been since he was in the sixth grade.

He said he started off running track just for fun and when he got to high school his competitive nature kicked in.

“I was just kind of going and watching him at the little track meets,” she said. “We just really were proud of him and we’ve just been behind him all the way.”

Carrie Rogers said no one in her family ran competitively but her husband Jason Rogers’ sister did. She said the family didn’t know anything about running but they supported Tristan anyway.

Martinez coached Tristan since he started running. Now a sophomore at Woodland, Roger’s has developed into a top runner almost all on his own, she said.

“He’s always been the most humble and quietest person you ever meet,” Martinez said. “At first he had lack of experience and confidence and this week I would say he’s gained a lot of experience; he learned racing tactics, just through practice and all. He’s really grown.”

As a freshman Tristan qualified for the 2A regional meet then the state meet. At the state meet he finished 15th with a time of 18:21. Boys’ cross-country is a distance of 3 miles.

This past spring about three weeks before the regional track and field meet,

Tristan suffered from a stress fracture. He told his family and coach that he was fine to run but as he continued it worsened and he couldn’t run anymore.

Martinez said he was a contender in the state meet but wasn’t able to quickly bounce back from the injury until this fall.

As unwise as it was to continue running with an injury, his family thought of it as a testament to Tristan’s love for cross country.

Carrie Rogers said it was then that she saw her son’s true love for the sport.

“He tried to hide it from us and just continued to run on it because that’s how bad he loves running,” she said. “(After the doctor told him to stop running) he said ‘I’m going to run no matter what they say.’”

This year Tristan placed second in the 2A regional cross-country meet with a time of 17:50.92.

Tristan said he loves the thrill he gets from and having the competitive urge.

And if you ask his mother Carrie, he can.

Carrie Rogers said over the years she’s watched her son immerse himself in the sport. She said he hopes to get recruited by a college and is preparing himself for the next step in competitive running.

“He really watched his diet…he talks about it all the time, he keeps up with all the runners, he knows who all the good runners are in college,” she said. “He’s dedicated to it.”

Before his injury Tristan ran about 12 miles a day, maybe more. He ran before school, in practice and after practice in the evening.

Martinez said when Tristan sets goals he sticks to them. She said what most don’t know is that he is driven and hungry, just as hungry as any other runner, even if he doesn’t show it.

At the state meet Martinez said Tristan wanted to place in the top five and did. He also decided to change his approach to the run and start off slower than usual and it worked.

“That’s what he said was the key (for placing fourth),” Martinez said.

This year Tristan was also selected to run in the Meet of Champions, which will be held Nov. 5. The meet brings together the top 10 runners from each class to compete with each other for a chance to be one of the top 25 finishers who will then move on to the Oklahoma/Arkansas Duel.

To those close to him there’s no question that the timid Osage runner can go all the way, but to strangers they see his boyish frame and think otherwise.

Martinez said for years Tristan has been overlooked because of his boyish appearance, but he lets the running do the talking for him.