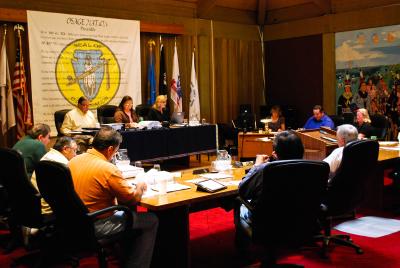 A 12th Special Congressional Session called by Principal Chief John Red Eagle starts Dec. 5 to consider most of the legislative items remaining after the Second Osage Nation Congress ended the 11th Special Session on Nov. 15 on its fourth day.

Congress unanimously voted to end the Special Session pending a review sought by the Executive Branch regarding the Nation’s appropriation laws for funding government operations. The Congress and Treasurer William Kemble are at odds over the appropriation laws, which govern how tribal government money is allocated.

The debate sparked on the 11th Special Session’s first day (Nov. 10) after Kemble sent two letters to Congressional Speaker Jerri Jean Branstetter, which detailed differences (from Congressional accounting records) in the remaining total revenue available for spending and Kemble’s opinion on spending annual tribal revenues, both of which affect government spending for the remainder of the 2012 fiscal year.

Some members of Congress took “grave concern” with the letters’ contents and mentioned other services, including the Nation’s health benefit card program and higher education scholarships, have yet to receive appropriations for the 2012 calendar year.

On the afternoon of Nov. 14, Branstetter and Congressional legal counsel Loyed “Trey” Gill met with Chief Red Eagle and Executive Branch staff to discuss the issues raised in Kemble’s letters. More than 30 items, most of which request tribal money appropriations, were put on hold pending the outcome of the meeting. Other items requiring appropriations include several tribal department budget modifications, as well as financing for Osage Casino expansion projects.

The following day, Gill reported to the entire Congress that Chief Red Eagle said his office would review the appropriation laws and language in the Osage Constitution, which were mentioned in Kemble’s letters.

“At this point we are simply waiting on (attorneys representing the Executive Branch) Terry Mason Moore and Kirke Kickingbird to formulate a position and have the Executive put that forth to the Congress so we will decide how we will go forward,” Gill said.

After the Nov. 14 meeting, the Executive Branch sent Congress a letter (signed by Assistant Principal Chief Scott BigHorse for Chief Red Eagle) recommending the special session should continue since it had budget modification items dealing with federal funding awarded to the Nation independent from tribal revenue generated from the gaming enterprise and Osage Tax Commission.

“As I indicated at the meeting,” wrote Chief Red Eagle, “my concerns are about the funding of education, particularly scholarships for higher education, and the funding of health services for Osage tribal members… While the language of the Constitution may not be drafted in a fashion that would remove all ambiguity about meaning, we may need to reach an agreement on the best interpretation so that we can proceed with our respective responsibilities of funding and operating tribal government.”

Chief Red Eagle said in the letter a review of the appropriation issue would be expedited and was estimated to take two days, but the Congress, which postponed its Nov. 14 Congressional committee meetings for considering legislative items, expressed concern the waiting period for the Executive Branch’s legal review would waste time. Special Sessions last up to 10 days but may be extended three additional days if needed.

“We’ve got a real dilemma,” said Congressman William “Kugee” Supernaw, “I don’t know what we can do, it seems like to continue to meet here could be just a waste of time other than these federal funds (appropriation bills ONCA 12-04 and ONCA 12-05).”

“My concern lies with a solution… but to ask the Executive Branch for a comprehensive solution that’s going to solve this problem and hopefully end this debate so we can go forward as a Nation with some confidence about the rules we’re operating under will require more than two days… I think maybe this session would be better put on hold and picked up right after Thanksgiving, or something, so we can really get to the bottom of this and reach some agreement between our branches and come up with a permanent solution.”

Branstetter and Gill said the 11th Special Session legislative items contained mostly appropriation bills, a majority of which requested tribal funding, except two bills with federal funding only. Those bills, ONCA 12-04 and 12-05 were fast tracked for 9-0 approvals by the Congress. Absent that day were Congressmen Anthony Shackelford and Mark Simms and Congresswoman Shannon Edwards.

ONCA 12-04 amends the Housing Department’s FY 11 budget and appropriates $1.7 million to the department for Native American Housing Assistance and Self Determination Act federal funding awarded to the Nation.

ONCA 12-05 appropriates an additional $11,206 to the Nation’s Communities of Excellence Tobacco Prevention Program and a budget modification for the Prevention Tribal Youth Mentoring Program.

-       A resolution to approve the Nation’s Election Board rules and regulations.

The Congress must also consider and pass an appropriation bill in order to fund the Health Benefit card program for the 2012 calendar year. At the Special Session’s start, Congresswoman Shannon Edwards said she had yet to see accounting information submitted to the Congress by the Executive Branch needed for the appropriation.

The Nation’s higher education scholarship program for 2012 classes also needs an appropriation passed by Congress, which will consider a second bill to fund the scholarships after Chief Red Eagle pocket-vetoed an $8.9 million appropriation bill (ONCA 11-104) to establish a revolving fund for the scholarship funds shortly after the Tzi-Zho Session ended Oct. 6.