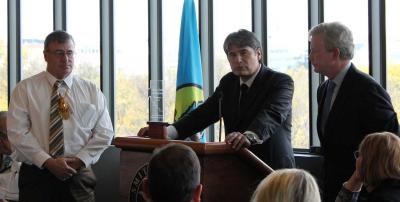 WASHINGTON – The Oct. 21 ceremonial signing of the $380 million Osage Trust Settlement came to a poignant end with words of gratitude, praise and a few tears shed among those involved in reaching the settlement with the federal government.

More than 50 people joined the Osage Trust Team and their attorneys who represented the elected Osage leaders and shareholders for a reception at the Smithsonian’s National Museum of the American Indian after the signing ceremony that morning at the Department of Interior headquarters.

At the event, people dined on Native foods served in the museum’s Mitsitam Café including wild rice and watercress salad, tacos, cranberry salsa, and blue cornbread.

Wilson Pipestem (Osage/Otoe-Missouria), the attorney who’s worked on the case for eight years, addressed the event attended by fellow Osages, family members, elected Osage leaders and federal officials involved with the settlement efforts. He said those Osages who passed away waiting for the case to end came to mind during the historic day for the tribe.

“There’s generations of people we talk about who have been impacted,” Pipestem said. He acknowledged his family including his late father Browning Pipestem, an attorney who focused on Native American issues and inspired him to pursue a law career. “He brought a dose of professionalism to everything,” Pipestem said of his father.

“It’s always good when you come to an end, but it’s not really the end,” Osage Nation Principal Chief John Red Eagle said of the trust case, which lasted over a decade before the settlement was reached. “It’s a beginning too.”

In looking to the future when the trust case settles, “I hope we can get into more enterprises, more production of oil and new technologies to benefit all Osages,” Chief Red Eagle said.

Congressional Speaker Jerri Jean Branstetter who served on the Trust Team called the settlement “a wonderful thing we’ll receive. People will be looking forward to Christmas.”

Teehee said when Obama was running for office, he made a commitment in visiting with various tribes nationwide: “The Native voice would be heard in the White House.”

Obama launched an annual Tribal Nations Conference with elected tribal leaders from across the country, including Chief Red Eagle who was among 12 tribal leaders invited to a pre-conference meeting with Obama last year.

“In the spirit of consultation, we have heard your voices,” Teehee said. She praised those who worked on the settlement, which called for “putting aside contentious history to get this resolved.”

“What struck home to me is the people who passed on (waiting for the settlement), now they’re looking down on us today feeling proud,” Teehee said.

Pipestem also acknowledged the Osage Trust Team members present and presented them with personalized glass plaques carved in the shape of Osage County. They also received hard-bound book copies of the trust settlement, which was signed Oct. 14 ahead of the day’s ceremonial signing activities.

“It’s been an honor working with the different tribal leaders,” Pipestem said of the elected Osage leaders who served on the Trust Team through the years. “They are people of great principle.”

One by one, Pipestem presented the plaques to each Trust Team member and individually praised them.

Congressional Speaker Jerri Jean Branstetter: “She’s always an enjoyable person to be with… We have a good working relationship – she gives direction based on principle.”

Trust Team Chairman and Minerals Councilman Dudley Whitehorn: “When we went to meet with government officials, he drew hard lines. He conducted himself with great honor.”

OMC Chairman Galen Crum: “I got to know Galen when he became part of Trust Team. I met him at prior meetings when he asked several hard questions. Galen had his eyes on every line (in legal documents).”

Minerals Councilwoman Cynthia Boone: “She has been an integral part (through the case’s twists and turns). If you’ve worked with her, you know she’s dang tough.”

Chief Red Eagle: An emotional Pipestem also shared a memory of his Grandmother Rose Pipestem who spoke of Red Eagle’s late father Ed Red Eagle Sr. “I want my boys to grow up and maybe they’ll be great like Eddy Sr.,” recollected Pipestem. “Johnny and I have become good friends, he calls me ‘brother.’ He brought dignity.”

Don Pongrace, a Washington-based attorney with Akin Gump Strauss Hauer and Feld LLP, who also worked on the trust case, recognized other attorneys who assisted including Jim Tuite and Merrill Godfrey. He also acknowledged the day’s weather in Washington: sunny skies with temperatures hitting the mid 60s.

To view more photos from the reception, visit the Osage News Flickr site.