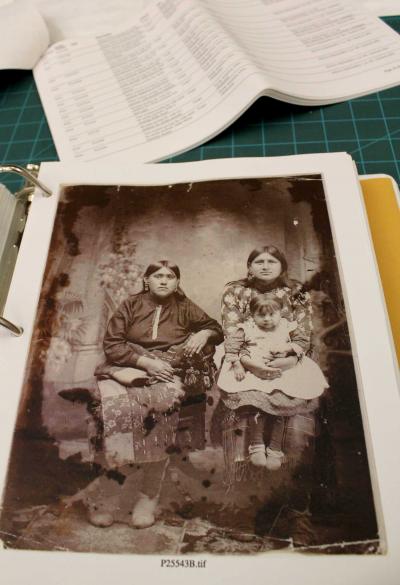 SUITLAND, Md. – Within the Cultural Resources Center of the National Museum of the American Indian are some of the most rare and precious of Native American artifacts.

An Osage Delegation, in Washington, D.C., to sign the historic Osage Trust Case Settlement with U.S. Department of Interior officials Oct. 21, was invited to view the CRC’s Osage collection on Oct. 20.

Fresh from a tour of The White House that morning, the delegation arrived at the CRC and prepared for what they would experience.

They were welcomed by CRC staff and given a short introduction to the collection. The delegation was split into four groups and assigned a research assistant to guide them through the preservation facility.

Upon entering the storage facility, one sees enormous ranges, row upon row, labeled according to region and tribe. The ranges, or storage units, are nearly two stories high and most are lined with shelves that can be easily pulled out to view the objects within.

Each range is split up into “banks” which consist of two large doors. There are nine banks in each range. About 10 banks contain Osage items, making it one of the larger collections in the CRC, said Tony Williams, a researcher who has been with the CRC for 12 years. The CRC is in possession of more than 580 Osage artifacts.

For the delegation, the CRC staff displayed Osage artifacts such as headdresses, a buckskin dress, a wedding coat, war materials, dance clothing, baskets, tools and other items.

“I was surprised that they opened areas to view their exhibits so openly. There were patterns of yarn work I have never seen before,” said Jerri Jean Branstetter, Speaker of the Second Osage Nation Congress and member of the Osage Trust Team. “I was also surprised to see there was more beadwork exhibits. The baskets on exhibit I had never seen before.”

The CRC is the second of three facilities comprising the Smithsonian's National Museum of the American Indian, home to the extensive collections and research programs of the museum, according to the NMAI Web site. Completed in 1998 and opened in 1999, the award-winning designed CRC provides state-of-the-art resources and facilities for the proper conservation, protection, handling, cataloging, research, and study of the museum's collections, library holdings, and photo and paper archives.

For example, a Ute cradleboard was being repaired when the Osage delegation toured the preservation lab area. The cradleboard had broken in two places and a female preservationist was discussing with a colleague the best way to go about repairing it so it could go back on display at the NMAI.

She said the small breaks in the cradleboard were easy enough to repair but if it needed major reconstruction, or she needed to do work on it that was more than minimal repair, she would contact the cultural advisor for the Ute Tribe. She said if the cultural advisor told her she could not repair it and that it was too culturally sensitive to be touched, she would do as they wish. Or, if the tribe wishes to do the repairs themselves, the CRC staff is sensitive to that, she said.

The preservationist was also working on a makeshift drum made by Native American U.S. soldiers who held a powwow while stationed in Fallujah, Iraq, in 2004. The female Choctaw officer who arranged the powwow donated the drum to the NMAI in 2006 and the NMAI used the drum for a grand opening during one of their powwows on the National Mall, the preservationist said.

By the time the delegation left, she was discussing how to best suspend the drum so the cables holding it in place wouldn’t wear on the metal tub the soldiers had used.

One point the staff at the CRC wanted to stress is that they make every effort to work with tribes when handling all objects, especially culturally sensitive objects.

The CRC is in possession of Osage objects that are no longer used in Osage ceremonies and the knowledge of how to use those objects is gone, or it’s culturally taboo to talk about.

“Anything used in ceremonial use the CRC has to get written permission from the spiritual leader of that tribe,” said researcher Tony Williams. “We keep the (sensitive) objects with the same storage area of (each tribe), but we keep them way up high in the top three rows of the ranges.”

For example, the top three rows of each range can only be reached by ladder and some objects are so sensitive that muslin material is placed over the objects so the researchers when searching for items can’t accidentally see the object when they open the doors, he said. The CRC has CD’s with each object within the CRC, each with a description, because in some cases, it is against tribal customs to take photos of the object.

Some of the Osage delegation came upon an Osage girl’s skirt, circa 1908, with ribbonwork patterns and colors never before seen by the delegation. Upon returning to Oklahoma the Osage News notified the Nation’s Historic Preservation Office of the skirt’s existence and it’s placement within the CRC’s collection. Dr. Andrea Hunter, director of the HPO, deemed it culturally sensitive and said she would be sending a letter to the CRC to have it placed within its culturally sensitive objects.

Walking amongst such powerful objects for only a couple of hours gave some members of the delegation pause, but for the CRC workers who are around the objects all the time is something else. The CRC staff is seasonally blessed off, or goes through tribal cleansing ceremonies, to help them in their jobs of taking care of Indian Country’s most valuable history.

Many tribes still have their ancient religions, with objects they sometimes believe carry ancient powers for healing or other purposes, said Williams.

“Sometimes I’ll be in an aisle and I’ll feel the energy and I’ll just say, ‘Hey, I’m here and I’m only here to protect these things,’” Williams said.

Members of the delegation expressed thanks to the many CRC staff that came out to say goodbye to them. One such staffer was a Pawnee man named Evan Thomas, who was one of the CRC staff tasked of showing the Osage delegation the facility.

“The most gratifying part of this job is to get to show people their own stuff,” Thomas said.

Many of the Osage women on the tour fell in love with a beaded shawl that was in the Osage collection, stopping many of them in their tracks and causing them to whip out their smart phones for pictures.

“The staff working at the CRC were not only knowledgeable about numerous items but they seemed to genuinely care about the protection and preservation of the Native American belongings they were tasked with taking care of,” said Osage Congresswoman Alice Goodfox, who was with the Osage delegation at the CRC. “From the baby boards to the ribbon work, everything they had was beautiful. We were able to see the most beautiful beaded shawl I have ever seen, it was tied 10 times and had beads throughout the fringe.”

Once the delegation was ready to leave the CRC, Cultural Liaison to Principal Chief John Red Eagle, Everett Waller, turned to the CRC staff and said, “Thank You, that was truly wonderful.”

For more photos of the Osage Delegation’s trip to the CRC, visit the Osage News Flickr page.