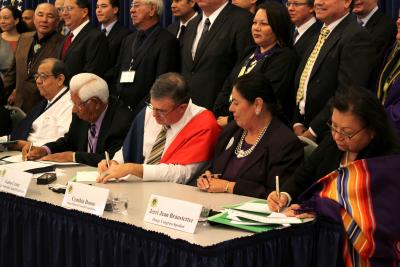 The Osage Trust Case Settlement disbursement date has been moved up.

According to the Office of the Special Trustee, the settlement disbursement date is no longer Dec. 5, it has been moved up to Nov. 28.

On Nov. 14 the United States will deposit $345 million in the Tribal Trust Account and the money will be disbursed to all shareholders of the Osage Minerals Estate Nov. 28, whether they are Osage, non-Osage, or entities. The payout will be $155,136 per full share.

The settlement is the result of months of negotiations with the U.S. following U.S. Court of Federal Claims ruling that said the Osage Tribe was owed approximately $330 million for claims arising from 1972 to 2000.

The settlement agreement, executed Oct. 14, will pay the tribe $380 million to compensate for its claims of historical losses to its trust funds and interest income as a result of the government’s mismanagement of trust assets.

The settlement agreement also provides dispute resolution provisions to reduce the likelihood of future litigation, according to a prepared release.