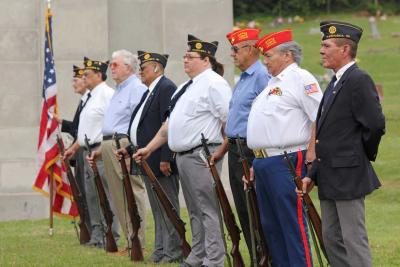 Nov. 11 the Osage Nation will celebrate its veterans with a ceremony in an all-day string of events at the Wah-Zha-Zhi Cultural Center hosted by the Harold Bigheart Smalley American Legion Post 198-Pawhuska.

The day begins at 11 a.m. with a flag raising followed by family songs and songs for this year’s honorees Lawrence Bighorse and Edward Lookout, both Osages who served in War World II.

Gary Elsberry, a Post 198 member and veteran, said the event is open to anyone wanting to help celebrate veterans all over, especially in Pawhuska.

“It’s a day to thank freedom and democracy because freedom isn’t free, because these are the guys that paid the freedom for everybody,” Elsberry said. “Everyone is welcome and every one will be welcomed when they get there.”

Elsberry said the flag raising will begin at 11 a.m. and then brought back down to half-staff, in honor of the holiday.

Elsberry said he’s happy to be a part of the event again. He said often times most civilians don’t understand the brotherly bond that veterans share and when Veteran’s Day rolls around they are reminded of the friendships they’ve made.

“We were all soldiers young and brave at one time,” he added.

To wrap up the evening a war dance is scheduled to begin at 7:30 pm.

Elsberry said it’s a nice family event that he, his family and many others can enjoy.

“My family, our family fought in the Civil War, two of my other brothers were in the military…” he said. “As a family we have a lot of veterans in our family, in our family it’s always been a special day, Veterans Day.”

Those taking part in the ceremony are: