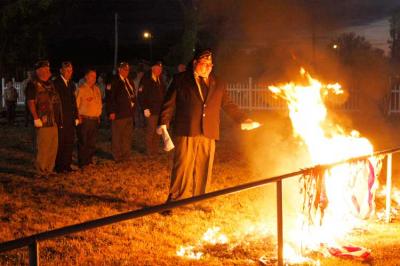 United States flags that have become too tattered or worn to fly are disposed of in a burning ceremony, normally held on Flag Day, June 14.

“The ceremony is conducted as an honorable destruction of tattered, worn, or damaged flags, and is the only acceptable destruction of our nations colors,” said Aaron Rouse, Post 198 member. “The event is an embodiment of patriotism, faith, loyalty, and memory of our troops, both serving and laid to rest.”

“The purpose of The American Legion in adopting this ceremony was to encourage proper respect for the Flag of the United States and to provide for disposal of unserviceable flags in a dignified manner,” according to the resolution.

Attending the ceremony was American Legion Posts and their auxiliaries, War Mothers Societies, Boy & Girl Scout troops and the public.

The night began with a call to attention by the American Legion Sgt. At Arms John Williams Jr., followed by inspection of the flags, a prayer, and posting of the colors, Rouse said.

The flags were burned as the song, "To the Colors," was bugled by Boy Scout Troup Leader Joe Stone, and the members attending held a solemn salute, Rouse said.

All citizens are welcome to attend the ceremonies, and are encouraged to donate any flags in a state of disrepair.

Please contact any American Legion or Boy Scout member for donation of flags and proper disposal. For more information call (918) 510-6780.

To see more photos of the ceremony, visit the Osage News Flickr page.