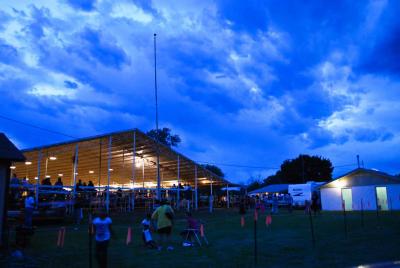 From the signing of the Osage Trust Case settlement after an 11-year battle, to The past year saw a lot of ups and downs for the Osage Nation, and a lot of court cases the rejection from the U.S. Supreme Court to hear the Nation’s case for a Reservation, the year was packed with legal battles that captivated the Osage people.

The Osage News has compiled the front-page stories of 2011 for your review.

Osage Nation Principal Chief John Red Eagle is chosen as one of the few tribal leaders to speak with President Barack Obama at the White House during the 2010 Tribal Nations Conference. At 3:19 on Dec. 15, an email began circling the Osage Nation campus that read: “Chief Red Eagle just sent a text that he is in the White House now.” Chief Red Eagle tells Obama that he would like to see the president keep his promises on settling trust cases many tribes have with the federal government.

The U.S. Court of Federal Claims rules in favor of the Osage Nation and awards in estimated damages, $310 million.

The U.S. Supreme Court decides to meet in conference on whether or not to hear the Nation’s reservation-status case. The Osage Nation Chief’s Office submits the final documentation to complete its land-into-trust applications for the Tulsa, Ponca City and Skiatook Osage Casinos.

The Osage Nation is slammed by winter storms Feb. 1, delivering record numbers of snowfall in all of Osage County. The Nation’s offices are unable to open due to the winter storms.

The U.S. Supreme Court calls for the opinion of the Solicitor General in the Nation’s reservation status case. The high court had until June to make a decision on whether or not to hear the Nation’s case, which was denied a rehearing from the U.S. 10th Circuit Court of Appeals.

The Second Osage Nation Congress kills two bills that would revise the Nation’s merit-based employment system, at the request of the Chief’s Office. The merit system is called for in the Osage Nation Constitution.

The Osage Nation Child Care Department requests tribal funding to replace $270,000 in misspent federal funds from the Second Osage Nation Congress for the Nation’s Day Care facilities. By month’s end, the Osage News learns the department director (at the time), Detricia Currin, is no longer working for the Nation.

The Osage News has fun on April Fool’s Day and fools a majority of the Osage Nation employees when they publish that the new McDonald’s in Pawhuska is shutting down due to too many Osages and not enough McDouble’s.

Chief Red Eagle issues a ‘gag order’ on the Nation’s employees, instructing all the Nation’s directors of programs to forward all inquiries from the Second Osage Nation Congress to Raymond Lasley, Executive Advisor of Programs.

Acting U.S. Solicitor General Neal Katyal advised the U.S. Supreme Court to not hear the Nation’s reservation status case. The Nation’s leaders react by filing a response June 6 to the high court and finish the paperwork for the Nation’s land-into-trust applications for the Skiatook, Ponca City and Tulsa Osage Casinos.

Osage Youth help NVISION artists paint a mural on the side of the Osage Nation Language building in downtown Pawhuska. The mural, of an Osage straight dancer with the Osage orthography that spells out ‘Osage Language,’ draws a crowd of youth.

Osages from all over the country attend the June dances and enjoy the singing, fellowship and cultural traditions.

The U.S. Supreme Court declines to hear the Nation’s reservation status case. Within a week of the high court’s decline, the Nation’s land-into-trust applications are approved for the Skiatook, Ponca City and Tulsa Osage Casinos.

The Osage LLC formally declines the $2.5 million in appropriation from the Second Osage Nation Congress for The American statue project. The LLC said, “this project is well outside our strategic scope.”

Osage elder Harry Red Eagle Jr. passes away at age 90. An uncle to Chief John Red Eagle, he was the Hominy In-Lon-Schka District’s Head Committeeman and advisor for many years. He served on the Osage Tribal Council and was a veteran. A big loss for the Hominy District

Wind farm permit is considered by the Osage County Board of Adjustments and approved. Osage resident Joe Conner speaks out against the wind farm and says the turbines will alter the pristine views of the Tallgrass Prairie Preserve. He also said construction of the wind turbines may also disrupt any unmarked graves of Osages who lived in the late 19th or 20th century.

The Nation’s land-into-trust applications for the Skiatook, Tulsa and Ponca City Osage Casinos are approved, placing 50 acres into trust.

Osages tentatively settle with the U.S. Government for $380 million in the Osage Trust Case, leading many to believe that a final settlement number is near. Wilson Pipestem, Osage/Otoe-Missouria attorney representing the Nation, says the settlement would be the largest with a single Native American tribe in U.S. history.

Osage Nation officials from the Principal Chief’s Office, the Second Osage Nation Congress and the Osage Minerals Council approve the settlement in the Osage Trust Case for $380 million and the payout date is tentatively scheduled for early December.

Osage Nation Employees protest outside of the Osage Nation Congressional Chambers for their merit-based pay increase. They are successful.

An Osage delegation travels to Washington D.C. to attend the Osage Trust Case Settlement signing Oct. 21. Made up of tribal officials and Osage citizens, the delegation visits the National Museum of the American Indian, the NMAI’s Cultural Resources Center, takes a tour of the White House and visits with the Bureau of Indian Affairs about the Wind Farm planned for Osage County. A ceremonial signing of the settlement takes place at the Department of Interior headquarters.

Osage shareholders receive their settlement at midnight on Nov. 28. Since Osages are all over the country, many sang their praise online. New homes and new cars were bought, debts were paid off and some decided to go on vacation.

A fundraiser, hosted by Osage citizens with the help of the Nike N7 Foundation and the Notah Begay NB3 Foundation, is canceled after controversy ensues. Some Osage citizens question and attack the event on blog sites and Facebook pages. They want to know who the beneficiaries will be from the fundraiser, Osage children for a new soccer field in Pawhuska or Nike and NB3? Charging $200 a plate and $10,000 a table, the fundraiser is canceled eight days before the event, sparking outrage by the event organizers at those who questioned the event and outrage by those who planned to attend.