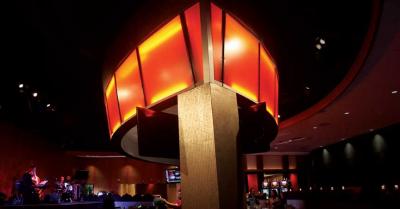 SAND SPRINGS, Okla. – Residents and casino goers have a new nightspot to consider thanks to an ongoing renovation project here at the Osage Casino.

On Dec. 16, construction crews put the finishing touches on the first phase of renovating the Sand Springs casino, which includes a new lounge area and a renovated high stakes playing area.

The casino now features a full-service bar with a dance floor and stage. The venue features booth seating and low lighting to give it a nightclub feel. Open since 2004, the casino is undergoing its first major renovation, which is expected to be completed by April.

Byron Bighorse, general manager of the Sand Springs casino, describes the new lounge as having “an ultra modern look,” adding that the renovation project is geared at making the casino a "destination" spot for everyone to enjoy themselves.

The renovation project originated as an upgrade for casino’s air quality system, which grew to include the interior renovation plans. Bighorse said the walls needed replacing since tobacco smoke can penetrate the walls.

“If you’re going to change the air (system), you’re going to have to change everything else,” Bighorse said adding the project addresses complaints by customers who did not like the air quality left by the original ventilation system. “My goal is to recapture everybody we lost.”

There are also 10 electronic bar top machines so gamblers can enjoy a drink while playing.

Plans include monthly drink specials at the bar, as well as opportunities for food delivery from the deli, according to a news release on the project.

There are four flatscreen TVs at the bar and plans for adding 12 more TVs so casino customers can also enjoy sporting events, Bighorse said.

The indoor stage venue provides an outlet for live entertainers to perform. Bighorse said, adding there are also plans to build a permanent outdoor stage at the casino.

Starting New Year’s Eve, there will be live music entertainment on Friday and Saturday nights, as well as daily “Sports Specials” that correlate with the seasonal sporting events.

The renovation will be done in four phases with three interior phases plus the exterior.

In the second phase, plans call for adding new carpeting and walls throughout the casino, Bighorse said.

The casino, which recently renamed its frequent players card program Club Osage, will receive a sit-down restaurant and a VIP lounge during the third project phase.

The renovation project is being conducted by Osage Manhattan Builders, which is a construction firm under the Osage Limited Liability Company.

Brock Eubanks, operations manager for OMB, said the project includes adding new office spacing as well as a stucco exterior for “the new skin on the building.”

The casino’s entry way and landscaping will be included in the project, Eubanks said.

The renovation project comes at a time when Osage Casino enterprise begins to improve its seven-casino venture as it competes with the Cherokee and Muskogee (Creek) nations' flagship casinos in the Tulsa metro.

The Osage Nation's Skiatook and Ponca City casinos are also slated for expansion and improvement projects.