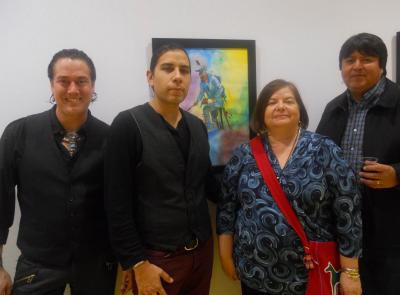 Joe Don Brave walked the streets of Paris, ate some of the finest cheese in the land and sipped some of the richest wines.

He strolled the streets of France taking in the breathtaking architecture. He thought of all the hard work that got him there and what his Osage ancestors thought of Paris centuries ago.

“Me eyes just opened up, it’s just a phenomenal city, all the architecture, old buildings everywhere, the Eiffel tower, pillars, big structures that go for miles,” Brave said. “Little streets…little restaurants on every corner, the cheese and the wine, breads.”

Brave wasn’t the only one who fell under the Paris spell, so did Anita Fields and her son Yatika Fields. The three Osage artists along with eight other Native American Oklahoma artists traveled to the City of Lights to take part in the Salon du Dessin et de la Peinture a l’EtauExhibit at the Grand Palais from Nov. 22-27.

For about a week and a half the three spent time getting to know Paris and let Paris get to them and their artwork.

Ginette Adamson, coordinator of the Oklahoma Delegation for the Salon and artist who showcased her work in Paris in 2010, was asked to put together a delegation of Native American artists from Oklahoma who would display their work in the exhibit.

Russell Tallchief, curator for the American Indian Cultural Center and Museum in Oklahoma City and Osage, reached out to the artists after they were selected by Adamson and the committee.

He said he reached out to about 20 Native artists across the state, including other Osage artists like Gina Gray and Ryan Red Corn, but because of little notice that was give many weren’t able to participate.

The artists were asked to submit a variety of mediums for specific categories in the exhibit.

Tallchief said he was excited about the trip since the idea was introduced.

“I thought this would be a way to get Oklahoma Indian art into at least the international art world, and get them to at least see it to understand it appreciate accept it as fine art within the world of art,” he said. “Just to get Oklahoma Indian Art over there is that people can start to get it into the mix of their exhibit schedule and perhaps host some of these arts to their galleries.”

He said the last known significance connected of Native Americans and artistry in France was when the Kiowa Five were taken to Paris to sing, dance and share Kiowa stories.

Tallchief said sending the group of 10 artists was a momentous occasion and one of a kind.

“There hasn’t been a major exhibit since then (since the Kiowa Five),” he said. “I feel like I can say it’s the fist major art exhibit of Oklahoma Indian Art, I’ve never heard of one that’s as significant.”

The exhibit was viewed by over 40,000 visitors worldwide and is one of the most distinguished architecture in Paris.

Aside from the exhibit the Osage artists took time to enjoy Paris.

Joe Don Brave has worked his whole life for something like the exhibit in Paris.

He said the opportunity came at the perfect time and he briskly jumped on board.

“I’ve been working for something like this for maybe 25 years, a lot of elbow grease, just staying with it, if there’s been anything I’ve ever stayed with it’s art…” Brave said. “I’ve always done it and I just stayed with it, the last eight years, I’ve really been down the road a lot, a lot of elbow grease involved, little shows here and there, powwows, set up, getting invitations here and there, meeting people, getting connections and just staying with it and eventually I got noticed…”

He took after his father who was an accomplished artist, and continued to paint along with a number of odd jobs he picked up along the way.

Brave said the trip didn’t hit him until he boarded the nine-hour flight to Paris.

Once the delegation landed Brave said they didn’t waste any time to explore.

“We hit the town, we actually just saw as much as we could see,” he said. “I must have walked 30 to 40 miles; we went to see all the museums, all the hot spots, all the touristy things.”

“Queen Antoinette castle, it’s as big as Pawhuska,” he joked.

It was an eye-opener for Brave as he learned more about a new culture, history and people.

But for Anita Fields, it was somewhat of a home away from home.

Fields has traveled internationally but never with fellow Osage or Native American artists.

She said the experience for her was being able to experience the rare opportunity with fellow Osage artists and her son Yatika Fields.

“Being there with Native artists, in particular Osage artists, one of the reasons I felt it was so important, as we were given the opportunity to share our culture, all of our work is rooted to our culture,” she said. “Yatika is my son, that’s another big treat, he’s traveled with me before but not in a professional setting, to be in a professional setting together doing what we both love, what is our passion, it’s great.”

Anita Fields is from Hominy but lives in Stillwater. She studied at the Institute of American Indian arts in Santa Fe, N.M., and received her Bachelor of Fine Arts degree from Oklahoma State University.

Her work has been shown in traveling exhibits throughout the United States, such as the Heard Museum in Phoenix, A.Z., the National Museum of the American Indian in Washington D.C., and the Museum of Art and Design in New York City.

Fields said when she was presented with the opportunity to show in Paris, she too wasted no time jumping on board.

“It was a no-brainer, I wanted to support the project, I felt that it was important for artists to experience new things and new places is quite essential to the work that we do, that experience, open another door to opportunities for us, help us grow as artists,” she said. “Everybody needs to go to Paris, it’s so beautiful there, the museums there are just really quite unbelievable, (there’s) such a long history of the arts and the appreciation for the art, they hold the arts really high up there in their culture.”

Yatika Fields said he too was happy to share the experience with his mother but also enjoyed the idea of representing his people.

He said he enjoyed taking the time to share his Osage culture with those who knew nothing about Native Americans, let alone Osages.

“It was great, I felt amazing it was very fortunate that that’s possible, that I could share that experience with my mom as an artist. We’ve come pretty far to be able to do this, have my work hanging next to hers,” Yatika Fields said. “I was excited, I was happy that I’d be going to represent…as a presence for our people over there, just showing work. Just being with people and talking to them, really discussing the works of what we’re doing, what we’re about and where we’re from.”

The 31-year-old Osage artist lives and works out of Brooklyn, N.Y.

Like his mother he’s traveled nationally and internationally. He obtained his art education from a number of institutes including the Art Institute of Boston, Oklahoma State University, University of Oklahoma and in Italy.

Yatika Fields said he also hoped to close the gap between Europeans and Osages.

He said many were surprised that Native Americans were still in existence.

“(I wanted them to see) we’re here and this is the work that we do, we’re just not a myth or legend,” he said. “I do think that our presence alone made it really fascinating. They had no idea Native Americans still existed, it was very unique for them to see that.”

Reuniting with the French

It was about 1827 when the French made contact with the Osage people.

A French man took a group of Osages back to France for about three years. Some say they were kidnapped, others say they went willingly.

Tallchief said growing up he was told the story of how the French took six Osages to France where they ended up stranded for three years.

He said he was told the French lied to the Osage and told them they were being taken to Washington D.C., but they instead ended up in France.

The French took the Osages to the Paris Opera, had them meet King Louis XV of France and charged spectators to see the Osages.

Tallchief said Osages were eventually left wandering France, Belgium and Germany for the three years they were there. They eventually met a Bishop from Louisiana who helped them home.

Tallchief said he’s always wanted to see exactly what his ancestors saw when they too visited France.

“Since I’ve been a kid I’ve been fascinated by the relationship between the Osages and the French which goes back to the French traders,” Tallchief said. “It’s just one of those things that I’ve always felt deeply personal connected to. I felt like I needed to do that, something that I wanted to do.”

Tallchief also enjoyed returning to Paris, as the last time he visited was to watch his aunt Marjorie Tallchief dance in the Paris Opera Ballet.

He accompanied the artists and danced in his Osage clothes for visitors.

Anita Fields and Yatika Fields were also fascinated by the history their people had with the French.  They said they felt a sense of empowerment by the connection.

It’s been months since the trip and the artists have already started putting their Paris inspirations to use.

Yatika Fields said he immediately followed up with contacts he made in Paris and is going to strive to “be more international.” He said he’s confident in his work and knows he can make it happen.

Anita Fields said she feels a strong connection in the art world has been made between the French and Oklahoma Native artists.

“It kind of opened a whole new door of work, new body of work, that’s one of the things I’m always looking for as an artist,” she said. “I just know that the experience will stay with me for a very long time, it was so big I really hope to be able to go back, it’s really an amazing place.”

Tallchief said he heard and saw good things happening between the Native artists and French gallery owners in Paris.

He said many were interested in Native American culture as a whole even if there were some language barriers.

“Making a relationship and building relationships with the French I think is the long term goal because ideally these artists will be invited to exhibit their work at galleries around the world as a result of people seeing their art at the salon,” Tallchief said.

Brave was inspired more by the city itself.

He said once he returned to his daily routine he had an overwhelming need to create new bodies of work.

“I started putting up some new works, serious work, I’ve kind of fed my eyes a little bit,” he said. “That was kind of the hump, I think now I’m actually feeling kind of relaxed now, and I’m feeling somewhat accomplished a little bit, but I think for some reason since I’ve been back I’ve been able to just start painting without even thinking, it’s kind of lifted something off my shoulders…

“I’m humble, I’m just staying humbled and I’m honored and just thankful that I got to do that,” he added.

Brave, Anita Fields and Yatika Field’s inspiration was drawn from all that they had witnessed while walking the streets of Paris, eating some of the finest cheese and savoring the finest wines.