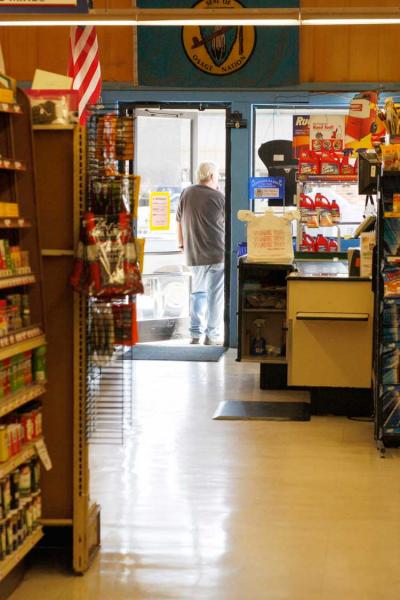 Palace Grocery store to be auctioned in early March

The Palace Grocery store may have a new owner in March.

The store is being auctioned March 6 on the stairs of the Osage County Courthouse after the property was foreclosed on. In the meantime, the Osage LLC plans to market the store to potential buyers in hope a reputable buyer will come forth, said Chuck Maker, Osage LLC Chairman.

The Osage Nation, which sold the Palace in 2010 to Rick Parker of Barnsdall, began foreclosure against the grocery store in October, claiming that Parker had failed to make mortgage payments and keep the property clear of liens, including federal and state tax liens.

As part of the foreclosure, the tribe agreed to have the store auctioned at a sheriff’s sale. The store appraised for $416,000. By law, the starting bid will be set at two-thirds the appraised value of the store.

In November, Parker, through his attorney Jean Walpole Coulter, struck back at the tribe, claiming that it had engaged in “wrongful and illegal conduct” and “predatory lending.” He also claimed that he had been fraudulently induced to sign mortgage and other agreements because the Palace had lied about its financial records, provided draft closing documents that Palace LLC was an Oklahoma LLC instead of an Osage LLC, and that the Palace knew that Parker had no lawyer when he signed the agreements.

Among the fraudulent acts that Palace LLC representatives committed, according to Parker: Financial documents did not reflect that the Palace did not pay its employees but that Osage LLC footed the payroll bill. Osage LCC is the tribe’s business arm. Parker also said the financials also failed to disclose that the store was losing $350,000 a year due to theft, uncollected accounts receivable and the sale of cigarettes to other tribes without compensation.

“As a result of these fraudulent and false financial documents, Parker paid too much for the building, equipment and inventory of the Palace Grocery,” his cross-claim states.

Rumors have run rife in Barnsdall and elsewhere that the Osage Nation made a substantial payment to Parker to make his claims go away. Sources with close knowledge of the case, however, say that Osage LLC settled with Parker for less than it predicted the cost of litigation would be, or about $60,000.

“The sheriff sale is under Oklahoma law, it’s a vehicle [for the Osage LLC] to gain control of the property and they [LLC] have first bid on it. Once control is taken back the LLC will determine value on the property,” said Chris White, executive director of governmental affairs for Principal Chief John Red Eagle. “The Osage LLC has to develop a plan in case of a higher bid. It would appear, regardless of the outcome, it’s anticipated that a reputable buyer for the property will be found.”

[Editor’s Note: This article originally ran in The Bigheart Times and is used with permission with additional reporting from the Osage News staff.]