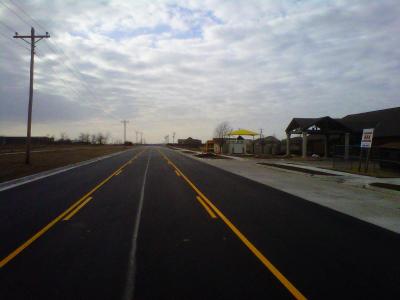 Motorists in Skiatook are enjoying a newly paved stretch of roadway thanks to a $2 million road-widening project with $1.7 million of the funding coming from the Osage Nation.

A one-mile stretch of Oak Street has been extended to three lanes with the center lane designated as a left turning lane for both traffic directions. According to a news release, the Nation footed $1.7 million for the project and Skiatook contributed $300,000 in pre-construction and construction engineering costs.

Officials from the Nation and Town of Skiatook celebrated the road project’s finish with a ribbon-cutting ceremony on Jan. 5. Oak Street is south of W.C. Rogers Boulevard, which is State Highway 20 and runs east/west out of Skiatook.

“The Osage Nation is dedicated to improving the infrastructure in all of Osage County,” Principal Chief John Red Eagle said.  “Making sure our residents have quality roads to travel to and from work, school or play is one of our top priorities.”

The road project covered one mile along Oak Street between South Lenepah Street and Lombard Avenue. The project also includes a new intersection at Lombard and Oak as well as 3,150 feet of sidewalk, according to the release.

“This project will benefit Skiatook tremendously,” Brown said in a statement. “We are proud to be a partner with the Osage Nation and are thankful for their investment in our community.”

The project completion ends traffic detours experienced by motorists who frequently use Oak Street to access places along the impacted road stretch including Newman Middle School, apartment complexes, and Skiatook Sweet Things Day Care which is operated by the Osage Nation.

The Osage Nation Roads Department has 28 projects identified on its current five-year construction plan, according to the news release. In the past year, four miles of construction projects have been completed, including the Okesa Bridge and Hill west of Bartlesville, the 39 Hill near the Bartlesville Osage Casino and the Guesso Creek Bridge just three miles south of Skiatook.

The majority of the funding for the ON Roads Department comes from the Indian Reservation Roads Program that is jointly administered by the Federal Highway Administration’s Federals Lands Highway Office and the Bureau of Indian Affairs (BIA) in accordance with an interagency agreement.

All federally recognized tribes are eligible to receive funding and the allocation amounts are determined by a funding formula that includes lane miles, traffic volumes and Indian population. The Nation provides nearly $5 million in funding on an annual basis, according to the release.