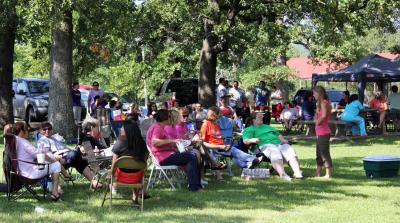 ON Foundation to hold its first charity golf tournament in April

The Osage Nation Foundation is kicking off 2012 with its own Web site and plans to hold its first-ever fundraising event this April – a golf tournament in Tulsa.

The one-day tournament starts at 10 a.m. and interested parties may register online at the Foundation’s www.osagefoundation.org Web site, which launched in early January. A full list of available sponsorships are listed on the Foundation’s Web site with individual playing spots starting at $95 (includes lunch).

“The goal is for the Foundation to eventually become a self-sustaining organization,” said Bill Webb, the ON Foundation's executive director. “So our first objective has to be to begin the process of raising money. We will have other ways to raise funds but this is a very visible and enjoyable way to spread the word about the Foundation while starting the process of funding our activities.”

The Tulsa Country Club, has been a landmark in Tulsa for more than 100 years and its 18-hole A.W. Tillinghast designed course has recently undergone a total renovation, according to a Foundation news release on the tournament.

The four-member ON Foundation Board approved its strategic plan during a Jan. 17 teleconference that included a brief update on the golf tournament. The strategic plan is intended to provide a framework for the board to guide future foundation activities. Sitting on the board are Chairman Alex Skibine, Monte Boulanger, Katsy Mullendore Whittenburg and Bill Kurtis.

Webb said the strategic plan is based on preliminary feedback received by the board and describes the plan as “a road map to better understand where we’re going.” The Foundation Board hired Webb, of Texas-based Legacy Foundation and Event Management, last August for the executive director post.

The board reviewed a draft of its strategic plan then voted unanimously to adopt the plan. Webb said he would like the plan to be as visible as possible then the board approved a suggestion to post it online.

According to the plan, one of the future focuses for the board is to develop a comprehensive fundraising plan to begin generating funds for supporting charitable endeavors. The Congress passed an initial budget for the Foundation Board during the summer of 2011 and a fiscal year 2012 budget, but the funding is to be used for operational expenses, according to the strategic plan.

Webb said the April golf tournament is a starting point for fundraising and the foundation hopes to raise most of its funds off sponsorships in addition to player fees.

According to the strategic plan, there are recommendations for the board’s consideration that include setting goals and objectives regarding fundraising which include a target amount to raise and where the money should be.

Webb said the Foundation would consult with Nation entities to make sure the Foundation is not duplicating any ongoing activities currently being handled by other entities and programs. “One of our challenges as a Foundation is to determine how we can be supportive of existing projects and be a vital ally for those currently carrying out the projects without appearing as though we are trying to ‘take over’ those projects,” according to the strategic plan.

The strategic plan lists some proposed short- and long-term goals that include:

Webb told the board that the Principal Chief’s office is working on filling the fifth vacant seat on the Foundation Board. The Chief is responsible for appointing board and commission members who are then subject to a confirmation vote by the Osage Nation Congress.

The Foundation has a Facebook page called “Osage Nation Foundation” and can be reached via email at info@osagefoundation.org or phone at (405) 415-0383.