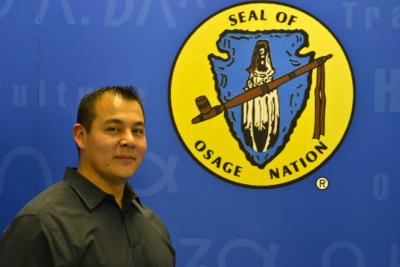 Berbon R. Hamilton, who serves the Osage Nation as Manager of Business Development and Special Operations for Osage, LLC, announces his candidacy for Osage Nation Congress.

Hamilton has listed education, housing, innovative economic development, Osage Tribal Employee Rights Office, and health as the areas of opportunity that he will dedicate his attention to once elected. “Having lived in Pawhuska for most of my life, I have had the opportunity to see, hear and experience the needs of our Osage people,” says Berbon Hamilton. “The five areas of opportunity that I am committed to, come straight from the Osage people.  They are areas of concern that I have heard from tribal members.  I have had the opportunity to listen to and learn from our elders, and have heard from parents and young leaders who have shared as well.  I plan on working toward addressing these concerns, and others, and delivering positive results.”

Hamilton currently serves the Osage Nation and its people as Manager of Business Development and Special Operations for Osage, LLC, and previously served as General Manager of Osage Data, a subsidiary company of Osage LLC.

His business experience and education has readied him to further assist the Osage Nation with being innovative in its economic development; and he will support the Osage people by promoting transparency and accountability in all of the Osage Nations practices and future development opportunities.

In 2011, Hamilton was named one of the recipients of the Native American 40 Under 40 awards by the National Center for American Indian Enterprise Development.  “My work with our tribal businesses has allowed me to obtain a vast network of tribal leaders throughout Indian County who, like me, have assisted in bringing progress to their tribal nations,” says Hamilton.

He is a graduate of Tulsa East Central High School and of Haskell Indian Nation University where he received a Bachelor’s of Science in Business Administration, with an emphasis on Management.

Hamilton was born in Irvine, California, to his parents Otto Jr. and Sandra (Murphy) Hamilton, before they returned to their native Pawhuska when Hamilton was five-years-old.  His grandparents are Otto Sr. and Josephine Hamilton and Berbon and Gertrude Murphy.  His Great Grandfather, William Pyor, served on the Osage Nation’s Tribal Council in 1928-1932.

“I am a hard worker, will listen to the concerns of the Osage people.  I will work hard to bring about progress for our tribe” says Hamilton.  “I am optimistic and I am enthusiastic about the future of our Osage Nation and people.”