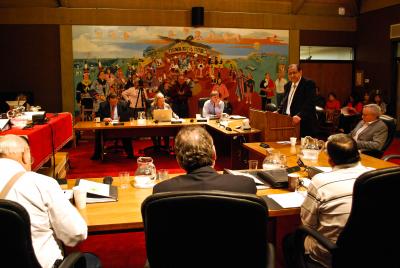 A legislative bill filed by Osage Nation Congressman Geoffrey Standing Bear seeks to dissolve the Osage Limited Liability Company over concerns the LLC has lost “millions of dollars” and has only three Osage employees since its 2008 launch.

Standing Bear introduced the bill, ONCA 12-29, on Day One of the 2012 Hun-Kah Congressional Session March 19. After discussion, the 10 Congress members present voted to advance the bill to General Order for further Congressional consideration.

With the bill advanced to General Order, ONCA 12-29 will not immediately go to a Congressional committee for initial consideration, which is usually the next step in the Osage legislative process once a bill or resolution is read into the record during session.

If passed by a majority of Congress, ONCA 12-29 would authorize settling the LLC’s finances, debts and return all property and assets to the Nation as part of disbanding the LLC.

The LLC, established by 2008 legislation, manages the Nation’s business activities with 11 subsidiaries independent of tribal government affairs as well as the Nation’s gaming enterprise, according to its Web site.

Standing Bear’s reasons for filing the bill include recent LLC statistics, which indicate the company has three Osages hired under the LLC’s company umbrella of 38 employees and a Congressional report, which states the LLC’s losses total just over $4.25 million as of November 2011.

In a news release, the LLC said its board of directors, nor staff, have not participated in any hearings or formal conversations about the bill or motives resulting in its creation.

“From our vantage point, no due process was followed by which the LLC Board or executive team could present the facts. None. This bill does not reflect deliberate or commensurate discussions between the Board and the LLC's Member. The sole owner of Osage LLC, ‘the Member,’ is the Osage Nation, acting as it does through its duly elected Principal Chief and Congress,” the news release stated.

Charles Maker, chairman of the LLC Board of Directors, told the Osage News that hearing of the bill “came out of the blue” for him. He also noted: “It costs money to start a company” and said the LLC is still in its early years in setting itself up for future endeavors.

Standing Bear told the Osage News he considers the LLC “a money pit. As to the LLC Board’s press release I believe they have always expressed a very different set of priorities from what I believe.” He referred to information received on the LLC’s finances and employee demographics.

Standing Bear also challenged the LLC’s reaction and referred to the 2011 Hun-Kah Session when the LLC requested a $5 million capital contribution to fund its operations. The Congress passed the LLC appropriation bill (ONCA 11-61 on April 15) with an 8-4 vote with Standing Bear casting one of the “no” votes.

“I was very clear in my opposition in giving (the LLC) more money… What I am saying about the LLC is not new,” Standing Bear said of his concerns with the LLC’s performance, which he has been monitoring since being elected in 2010.

The LLC has received tribal funding to support its operations and investments from Congress (via appropriation bills) four times since 2008. Those contributions total $16.5 million. The LLC also received five property transfers from the Nation totaling $6.8 million which include the now-defunct Gift Shop and Palace grocery story in Fairfax, which is now on the market.

Maker acknowledged the LLC currently has three Osages on the LLC’s payroll and the LLC has taken criticism for the number of Osages hired by the entity. “As these (LLC) companies grow, we expect there will be opportunities for more Osages to apply and work for us,” he said.

In the meantime, Maker said the bill’s existence has reached the LLC’s competitors and at least one of the competing entities is sharing news of the bill with other companies.

“We’re in negotiations with one company and they’re backing away fast,” he said.

Maker said he did not know how much the LLC’s losses currently total but said updated financial figures will be available when the LLC board meets with Congress which is scheduled for April 11.

On the Congressional side, Standing Bear has filed two Congressional resolutions to create “Osage Industries LLC” which would replace the Osage LLC, depending on the direction ONCA 12-29 goes when it comes back for Congressional consideration on General Order.

The legislation for creating Osage Industries LLC authorizes the entity’s formation and articles of operation in resolutions ONCR 12-09 and ONCR 12-10. Both resolutions are slated for First Reading during the March 20 session.

The Congressional Hun-Kah Session stretches 24 days and may be extended three additional days at the discretion of Congress.