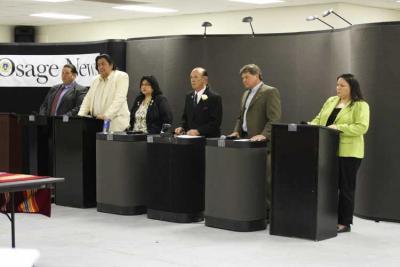 Osage News to host candidate debates May 5 and May 6

The Osage News has scheduled its Osage News Candidate Debates for May 5 and May 6.

The event, which faces off the 2012 Osage General Election candidates, will begin at 5 p.m. on both days at the Grayhorse Community Building in the Grayhorse Indian Village.

The debate will be broadcast live on the Osage News Web site at osagenews.org.

To determine which day a candidate will debate and what group they will be in will be determined by a drawing of names. The Osage News will hold the drawing once the candidates confirm their participation.

A representative from the League of Women Voters of Metropolitan Tulsa will time the candidates’ responses, give a 30 second warning and announce when their time has expired. The Osage News will publish a program for each day of the debate, outlining the rules for the debate and also list the questions that are to be asked. Each group to debate will have the list of questions for the same amount of time and the audience will be able to follow the debate.

Questions will not be allowed from the audience, applause or any type of demonstration will not be allowed while the candidates are debating. The Osage Nation Police Department will be on hand. No visual aids, such as power points, may be used by a candidate. The Osage News is non-partisan and does not support or oppose individual candidates, all political advertising (including brochures, bumper stickers, signs, buttons) is prohibited at the debate.

A question committee will be formed and be comprised of seven people. Three staff members of the Osage News and four members of the public. Each member of the question committee will be asked to sign a confidentiality agreement. The questions will be formed from the following topics: Economy, health, education, social services, gaming, legal, energy, preservation, culture and natural resources.

The representatives from the League of Women Voters will be in charge of moderating the debate. They will also enforce the ground rules of the debate and ensure that each candidate has an equal chance to answer each question.

Emcee for the event will be Susan Shannon, host of KGOU-KROU’s award-winning Indian Times. For more information about the Osage News Debates May 5 and 6, contact (918) 287-5668 or email osagenews@osagetribe.org.