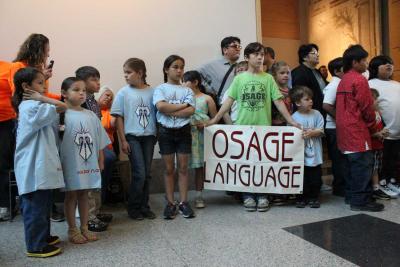 Osage youth show off their skills at annual Language Fair

The language fair, hosted in Norman at the Sam Noble Museum of Natural History, featured the Osage students performing different games, a gospel song, number counting and the Osage words for body parts. They also submitted books and posters in Osage.

“It has been a real pleasure to bring the students to the fair,” said Tracey Moore, Grayhorse Osage Language teacher. “They work hard at it everyday and every year they look forward to coming to the language fair.”

The fair brings together between 600-800 students who are learning their Native languages. The fair honors students and teachers by giving them an opportunity to publicly present their languages. This year there were more than 20 languages represented and 62 judges.

“The fair attracted 200 students and teachers with spoken language performances, song with dance and poster art categories. Now, the fair is two days and has grown by six categories to keep up with the many new ways that youth are using their Native languages today,” according to the Sam Noble Museum website.

The Osage Language Department has been bringing students to the language fair for six years, Moore said.

“The students really like the competition part and they really excel,” Moore said. “Every year they try to improve and do better.”

Israel Kohnle, 10, a Pawhuska Osage Language student has attended the language fair for three years. He said he really enjoys performing in Osage and winning. He is also proud to know his Osage language and thinks it is something very important.

“It is important to learn it (Osage language) so we can pass it on through generations and it’s so we’ll always know what we really are and who we really are,” Kohnle said.

Cameron Pratt, Pawhuska Osage Language teacher believes the main importance of the language fair is so the students, like Kohnle, can be proud of their language.

“It becomes a thing of pride where they can display their talents and display what they have learned,” Pratt said. “It shows who they are as Osage people and gives them a sense of ownership.”

Moore adds that the students compete in other competitions but the language fair competition is something special.

“This is their identity of who they really are and I see it in them that they think it (the language fair) is really important or else they wouldn’t be coming back year after year,” Moore said.

See two videos of the Osage students' performances by clicking on the following links below: