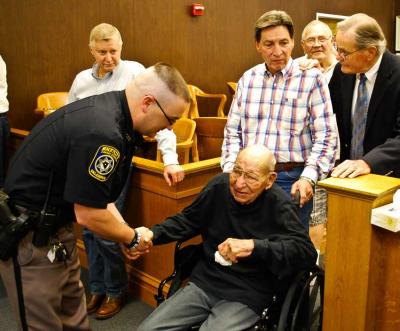 The Osage County District Court system surprised Osage elder Bill Mashunkashey Sr. March 30 with a citation of commendation for his work as a court case mediator in land disputes.

His work stretches for more than 30 years involving land issues, which earned the respect of many people working in the court system who relied on his work during litigation. He is retired and will be 89 this year.

The surprise took some finesse. Mashunkashey was notified he was needed at the courthouse in Pawhuska, so he joined a few family members and longtime colleague Bill Brown and they went to see District Judge John Kane. Mashunkashey sat quietly in his wheelchair outside the third floor courtroom for a few minutes before he was called in.

Mashunkashey was then wheeled into the courtroom filled with family members and friends greeting him with smiles while seated in the courtroom benches. He was wheeled to face Kane seated at the presiding bench who then read a citation of commendation to Mashunkashey.

“Bill A. Mashunkashey is commended by judiciary,” Judge Kane said for his longtime work efforts, he then closed his ruling with: “and thank God for you.”

“We did a lot of appraisals for the Osage County court system,” said Brown who worked as an appraiser with Mashunkashey during mediations. Brown helped arrange the covert surprise for Mashunkashey who expressed gratitude for the day and honor.

“You had no idea this was happening?” someone in the crowd asked Mashunkashey. “No, I didn’t know this was coming, I thought the judge needed me,” Mashunkashey replied before another voice quipped to a nearby deputy, “Take him to jail!” which raised laughs from his family and friends who came from their work lunch breaks or homes as far away as the Oklahoma City area.

Brown said Mashunkashey is, “the quintessential people person, he’s widely acquainted with the county and held in high regard – an ol’ timer whose word is his bond.”