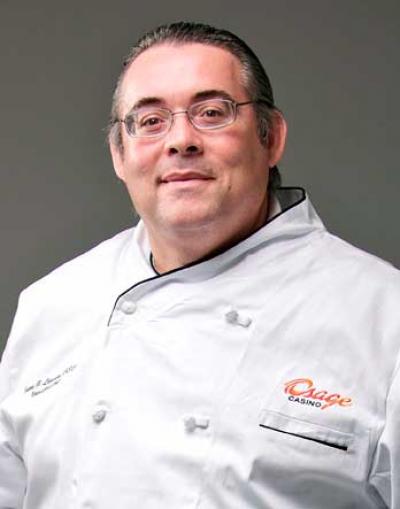 Osage Casino in Tulsa serving up more than the buffet norm

Jesus Lorenzo has worked for numerous Native American tribal casinos all over the U.S. and now he has come to the Osage Casinos.

Lorenzo is the executive chef for the Osage Casinos and operates the Tulsa Buffet that opened in January.

“I admire tribes who give their people a chance even if they don’t have the experience,” he said. “Then they hire someone like me to come in and teach them how to be successful.”

Before he took the job he flew to Tulsa to check out the area since he had never been to the “Oil Capital of the World.”

“I like the weather and the atmosphere here,” he said. “Then I brought my family and they liked it so we made the change from Greenville, Mississippi.”

Lorenzo has more than 20 years experience serving as the Executive Chef for several industry-leading hotels, resorts and casinos and owning and operating his own food and beverage consulting company.

He said he has prepared dishes for President George W. Bush, the Queen of England, government leaders in China, Jordan and Egypt and for the NFL’s Super Bowl XXXVIII.

Lorenzo was born in Venezuela and immigrated to Miami when he was 11 years old. Later, he moved to Houston and attended the University of Houston where he did his culinary training.

He went on to work as an executive chef at the Sweetwater Country Club in Houston, the Sac & Fox Casino in Hiawatha, Kan., the Pascua Yaqui’s Casino Del Sol in Tucson, Ariz., the Tunica-Biloxi Tribe’s Paragon Casino Resort in Marksville, La., the Isle of Capri Casino Lake Charles in Lake Charles, La., and for his own business Chef Lorenzo LLC in Houston.

He also has held the title of banquet chef for Intercontinental Hotel Houston Galleria in Texas and food and beverage director for Harlow’s Casino Resort in Greenville, Miss.

“At all the casinos I’ve worked at my job was to bring food quality to a new level,” Lorenzo said. “But at the Osage Casinos I was hired to bring more tribal members into the casino and bring the tribe to a new level and make it work.”

Lorenzo said he has Osages who work in his kitchen and it makes him proud. He said he tells his employees “what you are doing here today is big because you are becoming role models for others.”

“I like working for tribal casinos because you get to develop people and help them become successful,” Lorenzo said.

Lorenzo hopes that if others see Osages succeeding then they will follow in their steps.

Roman Tiger, Osage, works as the swing shift kitchen supervisor at the Osage Casino-Tulsa and thinks Lorenzo has been a positive influence on him.

“To see someone care as much as he does about the buffet is great,” Tiger said. “He is full of great ideas for us as a tribe and we are always talking about what or how we can better all of this for our tribe.”

The Tulsa Buffet has down-home southern cooking to gourmet and everything in between.

Lorenzo said his job is to create new dishes while keeping the local flares in mind.

He said he mixes a little bit of world cuisine with southern cuisine.

A lot of thought goes into the dishes Lorenzo creates for the buffet. For example, the Cajun dishes they made are not about the heat but the flavor.

“We are emphasizing on the flavor to change the perception that all Cajun food is hot,” Lorenzo said.

The Asian dishes come from China, North Korea, South Korea and different islands.  The Caribbean dishes are from Cuba, Jamaica and tropical islands. For the Surf & Turf dishes Lorenzo said they fly in different seafood from Florida, and the meat they use is Certified Reserved Angus beef.

“When you come to the buffet you won’t find the food we have at any other casino buffet,” Lorenzo said. “We have a unique line of food.”

Other foods they cook up are Oxtails, pig feet, stews, southern catfish, fried chicken and pizza, topped with Cajun marinara sauce with an Italian oil base.

“I think the buffet is a growing unit,” said Tiger. “All of us went from flipping burger to preparing exquisite meals.”

Lorenzo said he is still coming up with different concepts and plans to have pizza places and coffee shops in the other Osage Casinos. And once the Sand Springs casino renovation project is complete, the buffet will be a cross between Cheddar’s, Fish Daddy’s and Chili’s.