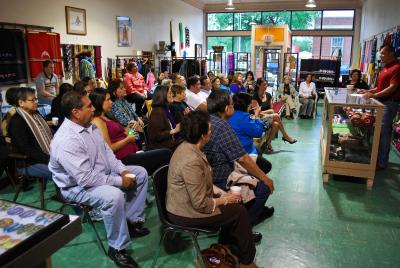 Candidates for the Third Osage Nation Congress have started their trek on the campaign trail with several making a stop at the Cedar Chest to share their interest in seeking public office.

Cedar Chest co-operators Julie O’keefe and Danette Daniels held an April 12 reception for the Legislative Branch candidates who are seeking the six Congressional seats up for grabs in the June election.

O’keefe said the store held a similar forum during the 2010 election season when Daniels ran for the Second ON Congress and wanted to repeat the event. Candidate names written on paper pieces were drawn from a bowl to determine the speaking order, which were limited to five minutes each.

The following candidates addressed the reception and here are some of the thoughts and comments they shared in running for office:

Berbon Hamilton, who was selected to speak first, said he believes more education to the people is needed on the Nation’s government operations. For example, Hamilton said more education is needed on how Constitutional amendments work considering Osage voters will decide on several amendment questions, which will make the June ballot and a special election to be held in August.

With a smile, Hamilton closed his speech in referring to his name order on the ballot: “I’m number three on the ballot, I’m number one in your heart.”

Jacque Jones said she has heard the needs and concerns of many Osages over the years who sought assistance from the Nation’s Constituent Services office where she serves as director. Jones said she is dedicating herself to learning about every operation in the government in preparing for a potential Congressional run.

Jones said the Nation needs to sustain itself through health and economic development opportunities and closed with: “I’ve always had an open door and that’s not going to change.”

Jozi Tall Chief said is concerned about political divisiveness and said she was addressing the public as family. “I feel like we need to come together as one and get rid of this divisiveness,” she said.

If elected, Tall Chief said she would address items she believes are at issue which include “unchecked powers to the Executive Branch” and legislation which would address elder care for Osages.

RJ Walker said an asset he holds in running for office is “the ability to get along with everyone.”

As director of the Nation’s Roads Department, Walker said his experience in exercising tribal sovereignty is working with several entities to secure millions of federal dollars each year awarded to the Nation for road projects in Osage County.

Congressional Speaker Jerri Jean Branstetter is seeking a second term and said it can be difficult at times to serve on the Congress with the need to make hard decisions that are up for Congressional consideration. She shared her professional experience in working at the state government level and was active with the Osage government reform movement when the 2006 government was being developed.

Branstetter said the Congress faces challenges in appropriating funding for tribal government operations. At issue during the 2012 Hun-Kah Session has been whether to dip into the Nation’s reserve funds to support money requests. Branstetter said “I would never vote to use that money at this point.”

Amanda Proctor said she plans to use her experience as an Indian law-focused attorney in her Congressional work, if elected. As an attorney, she has worked with 11 tribes and previously worked as a tribal housing director where she gained experience in issues such as land-into-trust processes and grant writing.

“I hope you, the people, give me the chance to apply (my experience) to the Osage Nation,” Proctor told the audience. One area Proctor said she would address, if elected, is day care so it is affordable and has Osage preference for the tribal clientele.

Olivia “Libbi” Gray said she would look at the Nation’s ethics laws if elected. “I think as elected officials, we need to hold ourselves to a higher standard,” she said.

Other areas Gray said she would look at, as an elected official are water rights and employment laws.

Kathryn Redcorn said “I have served as the real treasurer” referring to her director’s post with the Osage Tribal Museum. She touted her professional experience in working with various entities in safeguarding and collecting Osage artifacts, historical items and clothing.

Anthony Shackelford, who is seeking a second Congressional term, said ideas regarding the future “starts with us first. It takes confidence and trust in leadership” to serve, Shackelford said in asking for the people’s vote to serve again.

Maria Whitehorn said “we need strong leadership to knit us together.” She pointed at various knitted artwork on display in The Cedar Chest and said the Nation “needs a person to hold all of those pieces together.”

A first-time office seeker, Whitehorn encouraged the people to share their thoughts and concerns with her. “There’s lots of things I want to do, come talk to me,” Whitehorn said, adding she is open to hearing more ideas.

Candy Thomas said her entire professional life has included public service and planning. She shared her job experience, which includes grant writing, and working as an economic development specialist for the Osage County Industrial Authority.

“I feel like a keystone of my platform is going to be strategic planning,” Thomas said.

Shannon Edwards is seeking a second Congressional term and said she would work on legislation where there’s more work to be done. She shared various pieces of legislation she’s worked on during her six-year tenure as a congresswoman, which includes the bill establishing the Treasury Office and the health benefit card for all Osages.

If reelected, Edwards said she also wants to focus on investing the Nation’s surplus funds, which sit at approximately $50 million.

Linda Lazelle, a former staffer in the Congressional office, said one area of concern she wants to address is stronger legislation if elected. “Legislation sometimes didn’t meet the needs of Osage people,” she said.

“I would certainly like to (address) things that need improving,” Lazelle told the people, adding “you can call me at anytime.”

Angela Pratt took a moment to laugh at herself during her opening remarks. “I’m the oldest, shortest, chubbiest daughter” in the family. She said her placement in her family taught her a lot about responsibility.

In the legislature, Pratt said she would like to see more done for the Education Department and health programs to address the needs of the people.

Joseph Roger Lynn said an area of focus for the Nation is economic development so the tribe will be “self-sustaining and self-sufficient” to generate non-gaming revenue.

“What we need is a department of commerce and trading,” Lynn said adding, “We need to give our people hope, something to aim for.”

The Cedar Chest gathering is one of the first political public gatherings of the 2012 election season. Candidates have also been invited to Osage association group meetings in southern and northern California, New Mexico, Tulsa and Oklahoma City between now and June.