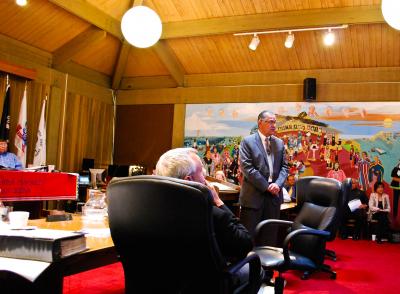 Two seats on the Osage Limited Liability Company’s Board of Directors are vacant after Charles Maker and Howard “Skip” Iba stepped down from the board.

Maker and Iba, who were first appointed and confirmed for three-year LLC board terms in 2009, were up for reconfirmation during this year’s Hun-Kah Session, which ends Thursday April 19.

But both men informed Osage Nation government officials that they were not interested in another board term shortly before they were to be considered for reconfirmations during the April 16 session. Following discussion, the Congress voted to remove the confirmations from the day’s agenda.

Maker (Osage) and Iba’s decisions to step down from the board come as the LLC has faced increased scrutiny from elected tribal officials and the Osage public over their business decisions, number of Osages hired under the company’s subsidy umbrella and money losses incurred by the LLC since its 2009 launch. According to the most recent statistics, the LLC’s losses totaled $5.7 million at the end of the 2011 calendar year.

The change also comes shortly after the LLC announced one of its subsidies, Osage Innovative Solutions, has received its 8(a) Small Disadvantaged Business status from the federal Small Business Administration. By obtaining the 8(a) status, the company may now compete with other business entities for contract work with the federal government.

Amid the recent developments and Principal Chief John Red Eagle’s decision to reappoint Maker for another term, Maker said he appreciated the support and he “wasn’t particularly ready to abandon the company… (but) I was getting serious messages from the Congressional body that they wanted change.”

“I feel like the company is being used as a political tool and I didn’t want to partake in that,” Maker said of recent developments surrounding the LLC, which survived a Congressional vote on a bill (ONCA 12-29) to dissolve it last month. The dissolution bill failed with three “yes” votes and seven “no” votes on March 23 with two others absent.

Maker did not name individuals, but the LLC’s activities have been criticized as some Congress members have aired concerns over the LLC which led to the filing and eventual vote-down of the legislation to dissolve the entity charged with being the business arm of the Nation. The LLC was set up to help the Nation grow its revenue stream independent of gaming, which is currently the Nation’s dominant income source.

Iba, whose name was also submitted for reappointment consideration, said his reasons for withdrawing from board consideration include focusing on family matters and other activities. Iba said he made the decision after consulting with his family.

“Personally I was pleased to serve the Osage Nation, I felt very honored to do so,” Iba said adding he “has a lot of respect for my (board) colleagues.”

Maker said co-chairwoman Mary Elizabeth Ricketts would be moving into the chairman position, which he held since his initial appointment and confirmation in 2009.

On the two LLC board member departures, Chief Red Eagle said he wishes “to thank Mr. Maker and Mr. Iba for their service to the Osage Nation."

Said Chief Red Eagle: “I'm presently in the process of communicating with certain individuals for the open positions. Mr. Maker informed me that, with the controversy surrounding (the LLC board) reappointments, he believes it is in the best interests of the Osage Nation to withdraw the nominations from consideration.”

Congressman Geoffrey Standing Bear, who sponsored ONCA 12-29, cited reports that the LLC money loses total about $4.25 million at the time and the LLC reported that three Osages currently work among the 30-plus employees under the LLC and its subsidies.

The LLC has received tribal funding to support its operations and investments (via Congressional appropriation bills) four times since 2008. Those contributions total $16.5 million. The LLC also received five property transfers from the Nation totaling $6.8 million which include the now-defunct Gift Shop and Palace grocery story in Fairfax, which is now on the market.

Standing Bear also told the Osage News he would not support any reappointments made to the LLC board if the same members’ names were submitted for reconfirmation. In addition, Standing Bear referred to the LLC money losses and said he would vote against any 2012 appropriation requests made by the LLC during the Hun-Kah Session.

The money losses now total $5.7 million as of 2011’s end, according to losses compiled in the LLC annual reports generated since 2008. The losses have also become a sticking point in the public discussion of whether the LLC is making good or bad progress since being created by 2008 Osage law and the first board appointments the following year. Remaining board members are Ricketts, Paul Bruce, and Jonathan Taylor.

Also a sticking point in the LLC’s discussions is the company’s business activities including passive investments and business partnerships with companies, which are mostly out-of-state.

Maker and Iba stood by the business decisions amid criticism from Osages concerned the business activities did not provide many job opportunities for Osages living in or closer to the communities of Pawhuska, Hominy and Fairfax.

Maker acknowledged the $5.7 million in losses but noted it costs money to start-up entities like the LLC, which may not initially make profits. “I like to think of them as investments,” Maker said of the losses, which include costs for operations, business networking and travel for the LLC to grow and complete its “due diligence in going out to look for partnerships.”

The number of Osages hired under the LLC’s umbrella of subsidies remains a sensitive subject and its discussion was revisited on April 11 when the LLC board presented its annual report to the Congressional Committee on Commerce and Economic Development and other interested Congress members.

Carol Leese, the LLC’s chief executive officer, was absent that day because his father had recently undergone surgery, said Maker who presented the report along side Bruce and Taylor who reiterated the LLC’s concerns over ONCA 12-29.

Taylor told the Congress the LLC was not against the Congressional body’s wishes to do its own investigations, but said “ad hoc” investigations, in reference to the events, which created ONCA 12-29 and “zombie rumors” caused harm to the LLC business activities as word of the dissolution bill spread into the LLC’s business environment.

Taylor said an Osage woman he wouldn’t name, who is qualified for a high post job within the LLC, withdrew her name from job consideration once learning of the LLC’s scrutiny aired in cyberspace, blogs and political newsletters. Maker said he learned that LLC competitors became aware of ONCA 12-29 and distributed copies of the bill to potential business customers.

Maker defended the LLC’s passive investments and business partnerships and said they were completed as efforts to build the company before it focuses on economic development opportunities in Osage County, which could bring job opportunities for local Osages. “In my life I’ve been in start-up companies, they go and get a business plan together and get people to invest in them. They don’t expect a return the first or second year,” he said.

Also at the April 11 meeting, Standing Bear raised the issue of three Osages currently hired under the LLC, which has a total of 38 employees. He questioned whether a professional training program is in place focusing on Osage tribal employees or prospective tribal employees of the LLC.

Maker said none are currently implemented nor in the strategic plan, adding: “Once we have profitable companies, you know we’re going to have ‘hire Osage’ policies – that’s what it’s all about. We have ‘hire Osages’ policies now (but) we can’t find them,” he said and referred back to the prospective qualified Osage employee story Taylor cited.

Standing Bear also questioned what is the LLC’s highest full-time employee salary is. Maker said the CEO position is paid the highest salary, but would not share that figure.

“I think that is something that is confidential, salaries are always confidential in businesses," Bruce said. Maker said he would share the CEO salary in executive session, but the committee did not consider entering one.

“I really don’t understand if we’re the representatives of the owner, that being the Osage people, why cannot we the owner know how much we’re paying the highest-paid person,” said Standing Bear who also inquired about an LLC deal in Arizona regarding a partnership with a land developer who was seeking to build an airport and parking structures in a popular sports complex in suburban northwest Phoenix.

The LLC formed Osage West LLC with Michael Oliver (of Oceans West LLC) in early 2011 with hopes to use Osage LLC subsidy, Osage Manhattan Builders in Tulsa, to develop the projects with assistance from the LLC’s Osage Pinnacle Design Group. OMB is majority-owned by the LLC and specializes in construction management and general contracting operations.

The LLC and Osage West LLC entered into executive talks with the city of Peoria where both projects would be located, but the relationship has turned south. “We are certainly in the midst of mitigating that situation and that’s probably as much as I should say,” Maker said because of the potential for litigation.

The LLC board made a pitch for another appropriation this year, but the commerce and economic development committee considered no amount. By the final week of the Hun-Kah Session, no member of Congress had filed an appropriation bill for the LLC.

Taylor addressed the issue of trust in his portion of the presentation adding that the LLC is aware trust follows a two-way street and “we have to earn trust. We can’t expect it, we can’t demand it. But on the other hand, you need to tell us how to earn your trust.”

Maker and Taylor said the LLC would have to start spending its profits gained through the various passive investments the LLC has entered into.  Bruce said the passive investments are earning a 9.5 percent return. The LLC also wrote in its 2011 written annual report handout at the meeting: “Without an appropriation, we will be forced to decrease expenses/ staff significantly and focus on the growth of our operating companies.”