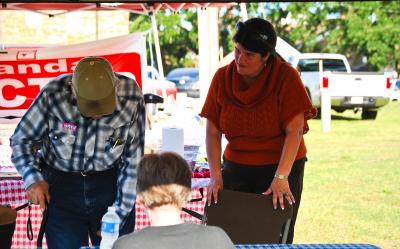 The 2012 Osage Nation General Election is history with the polls closing at 8 p.m. and the ballot counting underway.

Hundreds of Osages filed into the Congressional chambers throughout the day to cast ballots in the election determining which six Osages will sit on the Third Osage Nation Congress. Those who are elected will take oath of office next month.

As the dinnertime hours passed, some candidates said they had yet to vote at the polls but planned to do so before the doors were locked.

Around 6:30 p.m., candidate Amanda Proctor said she had yet to cast her ballot as she served people dinner plates at her campsite. Anthony Gray, who was also at Proctor’s camp, quipped they would be voting “on Indian time.”

“I’ve been here all day long,” said candidate RJ Walker. “I met a lot of people and shook lots of hands, it’s been more extreme than I anticipated.” Walker also said his camp ran out of the 20 pounds of fish cooked for the voters who came by to visit with him.

Candidate Shannon Edwards said she cast an absentee ballot ahead of Election Day noting she has also been on the go to meet voters. “I had the opportunity to talk to a lot of people,” she said as her fellow incumbents also visited with the public under the arbor they shared for camp space. The five incumbents seeking re-election shared the southside picnic arbor at the campus.

Studie Red Corn, who was Walker’s campaign manager, said this year’s election meant a lot to him personally because it’s the first time he cast an in-person ballot. “It felt really good to vote in person, the last two (2006 and 2010), I voted absentee.”

The ballot counting efforts are underway and it’s unknown when the results will be announced, but the Osage News will post the results once they are released.

Election Board Chairman Walter Hopper said three staffers from Maryland-based True Ballot, Inc. are on-hand to conduct the counting. True Ballot Inc. is the same independent company the Nation contracted with for the 2010 general and run-off elections.