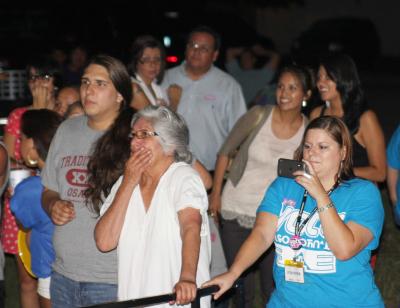 The Osage people elected four new Congressional members in the 2012 General Election and re-elected two incumbents to serve on the Third ON Congress, according to preliminary results.

In complete, but unofficial results, RJ Walker, John F. Maker, Maria Whitehorn and John Jech were voted in and incumbents Shannon Edwards and Archie Mason were re-elected in the June 4 election.

Seven proposed amendments to the Osage Constitution, also on the ballot, failed. The Election Board must certify the results before they are official, but provisional ballots will need to be counted first.

Election Board Chairman Walker Hopper announced the unofficial results at 9:53 p.m., less than two hours after the polls closed. He said provisional ballots would be counted on Wednesday and expected the results to be certified by week’s end.

Scores of Osages and their families gathered around the Congressional chambers after the polls closed to await the results. Hopper and the Election Board emerged from the chamber and announced the results from the porch area as they did in the 2010 elections. The crowd reacted with some gasps but remained silent for the most part, then broke into applause once Hopper finished announcing the results.

“I’m just humbled to finish where I did,” Walker said after the results. “I’m excited for the opportunity to make a difference, I want to thank all who voted for me and those who did not. I’ve learned we have an active and informed voting base.”

Edwards simply exhaled and said “whew” after the results were taped to the window of the chambers. Edwards said her focus is “to continue the good work” in serving her second term on the Congress.

Whitehorn said she was “shocked and pleased” with the results as she shook hands and hugged fellow Osages and their family members. “I got some goose bumps (when hearing the results), but this was worth it.”

Maker was not present on Election Day, due to his mother's passing the evening before.

In this election in-person ballots slightly edged over the absentee ballots counted on June 4. According to the results, 1,068 Osages voted in person and 1,056 absentee ballots were received in time for the counting process.

In the Congressional race, there are 50 votes between Jech and Amanda Proctor who finished seventh with 437 votes or 23.66 percent. Also placing close are Anthony Shackelford (421 votes); Cecelia Tallchief (420); and Becky Johnson (413).

According to the proposed term limit amendment (ONCR 11-10), the Principal Chief would be limited to three terms in office.

The other amendments failed with “yes” votes ranging from 59.6 percent to 50.8 percent, according to the initial results.

Voter Stephanie Irwin said she didn’t know what the results would bring, adding she was waiting to hear the provisional ballot count. Irwin was also a poll watcher for Whitehorn and commended the Election Office staff for their work. “It was a tedious, tedious job, they did an excellent job in there,” she said, adding, “I hope (the candidates) do a good job, we gotta give them a chance.”

Tony Daniels said he was “happy for those who ran for Congress tonight” adding “a new chapter begins for all of us.”

The Osage News staff shot photos of the Election Day ongoings and those images have been uploaded to the newspaper's Flickr page. To view the Election Day 2012 photo set, click this link: http: www.flickr.com/photos/osagenews/sets/72157630046330714/