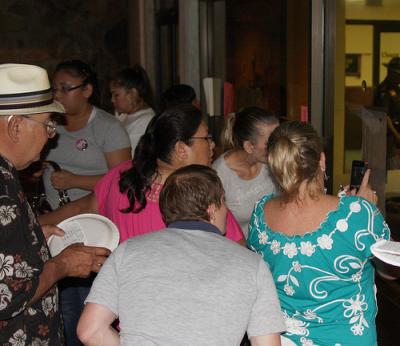 The Osage Nation Election Office received 18 provisional ballots mailed for the June 4 General Election, but those ballots will not be counted toward the final results because that number is not high enough to impact the unofficial results.

Election Office workers collected the provisional ballots kept at the Pawhuska post office Wednesday morning, which is 48 hours after the absentee ballots were collected for the June 4 election. Those considered to be provisional ballots are postmarked at least one day prior to the election and received by the Pawhuska post office within 48 hours after the election.

In this year’s general election, 18 provisional ballots “are not enough to affect the outcome of the election,” said Election Supervisor Alexis Rencountre. For that to happen, Rencountre said 50 provisional ballots would’ve been needed because that’s the number of votes between John Jech, who placed sixth with 487 votes and Amanda Proctor, who finished seventh with 437 votes.

“If we had more than 50 then we could (count them), there is a possibility that would make a difference,” Rencountre said.

The ON Election Board is scheduled to meet at 9 a.m. Friday to consider certifying the election results at its Pawhuska office.

In other election news, the Election Office has released a breakdown of the election results which detail how many votes a candidate received from in-person voters and those who cast absentee ballots. The same breakdown for the seven proposed Constitutional amendments was not immediately available. All seven amendment questions failed to receive 65 percent of the "yes" vote in the election.

According to the unofficial results breakdown, Shannon Edwards received the highest number of absentee votes out of all the 34 candidates who ran this year. Edwards (who placed fourth) received 416 absentee votes and 168 in-person votes, which equal 584 votes.

The breakdown for the remaining top four candidates who finished with the most June 4 votes is: