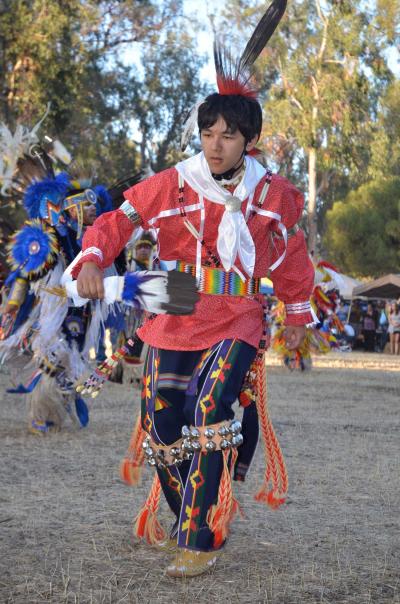 Layton Lamsam wanted to represent the Osage Nation to the best of his abilities and what better way then getting involved in the 41st Annual Stanford Powwow.

Lamsam, a sophomore at Stanford University, co-chaired this year’s annual Stanford Powwow that was held May 11-13.

“I was sad that my school years run over the Grayhorse dances, but I thought I could still represent Osages well by getting involved in the powwow,” Lamsam, Osage, said.

Last year, when Lamsam was a freshman he danced at the 40th Annual Stanford Powwow and really liked it.

“I liked the fact that it (Stanford Powwow) was put on by students and how it was a combination of the Native community’s efforts,” Lamsam said.

Lamsam decided to get involved this year and joined The Stanford Powwow Committee along with about 80 others.

The committee is broken into subcommittees and Lamsam joined the coordination committee, which is the right-hand to the co-chair.  Lamsam was then promoted to the “powwow intern” where he would be trained to co-chair the powwow in 2013.

Lamsam said the committee usually has two, sometimes three co-chairs to balance the workload but this year there was only one co-chair. The co-chair, Mija Cruz was in need of some help and asked Lamsam to co-chair this year’s Stanford Powwow with her.

“I was very excited and a little scared because it is a ton of work but it is for a good cause,” Lamsam said. “I also thought it would be a great opportunity for me and I would learn a lot from it.”

Lamsam, 20, is a pre-medical student majoring in Biology. He is currently working in an Immunology (study of the immune system) lab doing research related to T-Cell receptors (TCR).

He is from Pawhuska and his mother is Teresa Trumbly Lamsam, Osage, and former board member of the Osage News Editorial Board. His grandparents are Joe Trumbly, Osage, and Arlena Trumbly who are from Pawhuska. He graduated from Creighton Preparatory School in Omaha, Neb., in 2010.

The first Stanford Powwow was held in 1971 and was hosted by the Stanford American Indian Organization. The powwow was held to “offset the negative image of the Indian mascot and to bring a diverse Native American presence to the campus,” according to www. Stanford.edu.

This year’s powwow had over 100 arts and crafts vendors, said Lamsam. And about 30,000 people attend the powwow each year.

“People from all over California and across the U.S. attend the powwow,” Lamsam said. “It is the biggest event in the Bay area and one of the biggest in California.”

As co-chair, Lamsam’s responsibilities before the powwow were to coordinate the arrival of the head staff and to make sure each sub-committee was on track. The budget for this year’s powwow was $160,000.

“I oversaw all the sub-committees to make sure everything was getting done that needs to be done,” Lamsam said. “I also coordinated the special performances for this year’s powwow.

During the powwow Lamsam’s role changed into problem solver.

“Each committee had tasks to do and when they ran into problems they came to me,” Lamsam said.

Lamsam admits co-chairing was a lot of work and he had to plan accordingly which meant taking fewer classes this spring quarter.

“I had to carve out extra time but I had a really great time,” he said. “It taught me a lot about leadership and what is affective and what isn’t.”

Lamsam’s mother, Teresa Trumbly Lamsam attended the Stanford Powwow and got to see her son in action.

“I am very proud of him and I know one of the first things he thought about when he agreed to be co-chair was his community back home,” Trumbly Lamsam said.

Young people who leave their homes to go attend college are always trying to find a way to connect back home, Trumbly Lamsam said. And co-chairing the Stanford Powwow was Lamsam’s way of connecting back home and making his Osage people proud.

“I noticed on Facebook that Layton had nice comments and support from Osages,” she said. “I was happy to see that.”

Following the powwow, Lamsam hosted Indigenous Health week on May 15-17 with help from Stanford’s Natives in Medicine (NIM).

NIM is a support group for undergraduate students who want to purse medical careers. The group has about 15 active members and Lamsam is the financial officer.

Lamsam came to NIM with the idea about Indigenous Health Week because he thought it would be something good for undergraduate students.

“As a pre-medical student we have to take a lot of classes that aren’t related to patient care and a lot of students end up feeling removed from their original goal,” Lamsam said.

The event included a series of speakers that talk about diabetes, experiences as medical students, and leadership in medicine.

“Indigenous Health Week was an educational kind of symposium and a chance to get pre-med students motivated and other individuals excited about medicine in Indian Country,” Lamsam said.

Lamsam believes that the Indigenous Health week is the beginning of bigger things for the Natives in Medicine Society.

“Hopefully it is the beginning of a wider project on Indian Health,” Lamsam said.