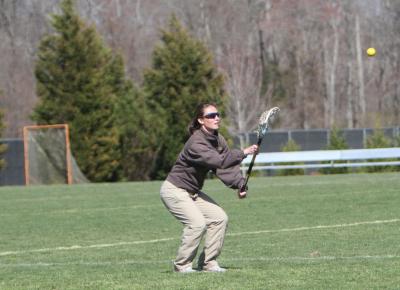 Sisters to compete in 2013 World Cup

Dawn Easley and her sister Michaela Rich never thought they’d see the day when they’d play together on the same lacrosse team.

Easley is 12 years older than her sister 17-year-old Rich. Rich is a junior in high school and Easley is the head women’s lacrosse coach at a Division II school. Both are Osage.

Easley always wanted to someday coach her sister but never thought she’d end up playing on the same team as her, and not just any team, but on a Native American team that will play against some of the best in the 2013 World Cup.

“I always loved to imagine the idea of me coaching her,” Easley said. “I never thought in a million years we’d have the opportunity to play together.”

But the opportunity came and it didn’t take a million years to arrive.

Easley and Rich have been selected to play for the Haudenosaunee Nation Women’s Lacrosse Team, a team made up of Native American lacrosse players throughout the US and Canada, that will eventually compete against international teams in the 2013 World Cup.

The team will play both the USA Women’s Lacrosse team and Canada next month in Canada.

The two were given three tryout sessions to qualify, if selected they will take part in workout session before the 2013 World Cup that will be held in Oshawa, Ontario, Canada.

It’s a dream that Easley has had, to play on the next level, and something she’s always hoped for her younger sister.

The two started playing lacrosse when they were young.

Easley was a sophomore in high school and an avid soccer player who wanted to give lacrosse a try.

“I was automatically drawn to it,” she confessed. “I liked the speed of the game, the finesse, the teamwork, I liked the contact.”

Rich grew up watching her older sister and brother play the sport but started even younger than the two.

She was a cheerleader but there was something about lacrosse that kept her craving the sport.

“I guess because I caught on really fast,” she said. “I like the fact, I just really like working as a team.”

Rich now plays mid-fielder for Linganore High School in Frederick, Maryland and has already committed to playing college lacrosse for Liberty University, which is also in Maryland.

The two are among the four children to Mark Rich and Belinda Rich.

Easley has been the head lacrosse coach for Pfeiffer University in Charlotte, North Carolina for the last four years (going on her fifth year).

After high school she was given an athletic scholarship to Pfeiffer where she played four years of college lacrosse. Once she graduated in 2005 she knew she wanted to coach the sport. She eventually moved to England where she coached at a boarding school for one year.

“It was a great experience for me so I was really able to learn diversity, culturally and really step out of my comfort zone,” Easley said. “And really see how sports work in another country.”

After a year she returned to Pfeiffer, this time as an assistant coach, where she coached from 2006-2008. Then, at 24 years old, she became the head women’s lacrosse coach at Pfeiffer.

Easley said she was thrilled to be named the head coach as that was something she had dreamed about since she was a junior in college.

“I was very honored to be named the next head coach, all the coaches in our program have been Pfeiffer grads,” she said. “It was a lot of expectations, I was really exited to take on that responsibility. Being a coach you get to help other women become great athletes, you can put that time and energy to developing other people and that game in them.”

In November of last year, Easley was forwarded an email tryout for the Haudenosaunee Nation Women’s Lacrosse team, and at the time was pregnant, so she forwarded the email to her younger sister.

“I wanted to see her develop more as a player,” Easley said of Rich.

At first Rich wasn’t sure what to do. She said she had tried out for a national team for other girls her age but the tryout seemed to be of a different caliber.

“When I first heard of it I was like these girls must be extremely good if they’re playing against the best of every country,” she said.

Months after Easley sent the email to her sister in February Easley miscarried with her second child and her perspective on the situation changed her involvement in the tryout.

“I was looking through my email folder and I came across the email and I reread it, and a full on emotions came over me,” Easley said. “I just knew that God has a reason for everything … I knew that a great opportunity has come along, had I not had that miscarriage … I might be able to play in the US Olympics in 2013.”

Easley is a mother to her son Caleb Easley and is married to Joe Easley.

Easley said she decided to try out for the team with her sister, which she figured would ease Rich’s mind a little about trying out.

The two made it past the first round and were invited to return for the second.

Easley said she hadn’t played competitively since she graduated from college but found she still had it in her.

“It was hard, cause you want to be competitive, it’s hard to get that out of your system,” she said. “I don’t think you ever lose that competitive edge. You stop playing for awhile but you still are competitive by nature … ”

While Easley reconnected with the game as a player Rich learned a lot about herself as a lacrosse athlete.

She said she felt uneasy about her skills leading up to the tryouts but once it was done her feelings changed.

“I was nervous to try out and when I got there they were all so good,” she said. “It made me feel great, the fact that I could keep up with those people, and some of those women were really old but they were still in shape.”

Rich said even though she and her sister had just one tryout together she’s happy she took up the opportunity.

“It was awesome,” she said. “We never played together, it was just a whole different level when you’re on the field.”

She said even though she never got to play with her sister it was always at the back of her mind. But now that they’ve had the opportunity she couldn’t be more thrilled.

“I just thought this is even better than just coaching her, I get to do both,” Easley said. “I’m so excited about it, I’m scared to death about it, (but) being sacred is what motivates me to do this. To play and represent the Osage Nation, represent who I am and to represent my family.”