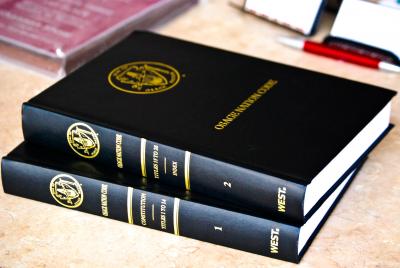 Those interested in purchasing a set of the first edition ON code books may buy them
from the Congressional office for $272.50 per set. An order form for the books is
available for downloading and printing on the Congressional Web site at: www.osagetribe.com/congress

Both books contain a total of 28 titles of Osage law, as well as a section for the 2006
Constitution and index for using the books.

The compilation of Osage law into the written code fulfills the purpose of a 2008 law
passed by the First ON Congress known as the Osage Nation Law Codification Act
(ONCA 08-40). The Second ON Congress later approved a $40,000 appropriation bill to
carry out the codification efforts during the 2011 Hun-Kah Session.

According to the code book publisher’s preface: “The Osage Nation Code, consisting
of Titles 1 to 28, is a comprehensive codification of ordinances, acts, and session laws
enacted by the Osage Nation Congress, formerly the Osage Tribal Council, and approved
by the Principal Chief of the Osage Nation, or becoming law without its signature.” The
Nation utilized legal publisher Thomson Reuters Westlaw for printing the books.

The preface also notes the code books reflect all Osage law passed through the 2011
Hun-Kah Session.

Former ON Supreme Court Chief Justice Charles Lohah penned the foreword for
the books. He wrote: “The First Congress of the Osage Nation made it a priority to
initiate the codification of Osage laws. The Second Congress continued this pursuit by
addressing laws in need of technical correction or restatement, and by appropriating the
necessary resources for its completion.”

“This code is a compilation of laws established on the traditions, beliefs, and wisdom of
Osages who are too many to name,” wrote Lohah. “It establishes the legal foundation
for the Osage Nation enabling its leaders to continue to strive for the general welfare, the
defense of sovereignty, and the protection of rights. These laws are created and codified
for the protection of future Osage generations, who will add to them, amend them and
repeal them to address the needs of our People dictated by the time in which they live. As
society continues to evolve, so shall the Osage Nation and its laws.”