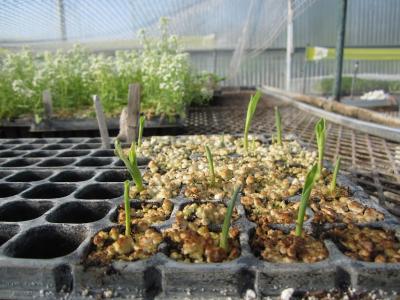 Keir Johnson and Katie Davis are teaching others how to grow food like Osages did long ago through their Osage Historical Seed Preservation Project.

“The inspiration (for the project) is rooted in a need to ensure that what has been lost is brought back,” Johnson said. “This type of work is for the future, for children, young people, parents, grandparents and great-grandparents to continue the ancient ways of passing seed among relations.”

Johnson and Davis have collected three strands of Osage corn; Osage Brown corn, Osage Speckled corn, Bighorse corn and Osage Blue, which is a rare seed. Their goal is to transplant the corn into a small garden bed at the University of California, Davis (UC Davis) student farm.

“The seeds were given to us by Ward Beers, a friend of the Red Corn family, who lives in New Mexico,” Davis said.

“We live in a time where up to 65 percent of corn grown is genetically modified and will cross with Native varieties and change their properties forever,” Johnson said. “We are hoping to begin the humbling process of saving Osage strands from such a fate.”

Johnson, Osage, is from Northern California and has a bachelor’s degree in humanities from San Francisco State University. He started this project so he could become reconnected with the Osage Nation and culture.

Davis is from Youngstown, Ohio and has her bachelor’s degree in plant biology from Ohio University. She is currently pursing a master’s degree in agriculture at UC Davis and plans to write her thesis on the Osage heirloom garden and Osage Historical Seed Preservation Project.

The project officially started in November, when Johnson approached Daniel Potter, a professor in the department of plant sciences at UC Davis. Since then Johnson, Davis and Potter have been meeting and conducting phone calls with Osage Tribal members in Pawhuska.

In June, Johnson and Davis will be coming to the Pawhuska In-Lon-Schka dances and will be staying an additional three to four weeks.

“We need to collect more seeds from individuals who have them, even if it’s really old or there’s only 10 seeds, or even if they’re not entirely sure what it is, that way we can begin to build the seed bank,” Davis said.

During their time in Pawhuska, they want to establish the seed bank, collect seeds, establish a plan for growing them and conduct interviews to get an understanding of tribal member’s relationship with some of the old plants.

“We are hoping that Osage tribal members who have seeds will want to share them with the project or be willing to grow them on their own, in order to keep the variety going,” Davis said.