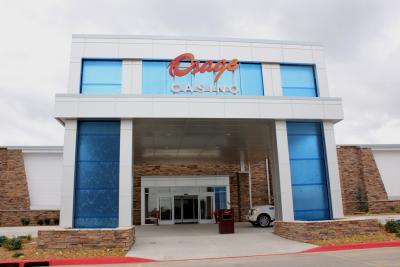 Construction crews have wrapped the 10-month renovation project on the Sand Springs casino which includes an improved smoke ventilation system, VIP lounge, new bar with dance floor and a sit-down restaurant which opens to the public next month. The renovation project cost $9 million to remodel the casino, which was built in 2004 and currently houses 462 electronic slot machines.

The casino’s exterior is also refurbished and no longer resembles a “white barn” as some have called it. The exterior now has brickwork, automatic sliding-glass entry doors, and the main entrance has a new shade with dual waterfalls on each of its main pillars.

Casino and Osage Nation government officials gathered at the facility to celebrate the milestone on June 20 with a grand reopening ceremony. Principal Chief John Red Eagle said a blessing before casino officials spoke about the project.

“This is the first of seven, this one is the launch of a new standard for us, a new way of doing business for us,” Osage Casino CEO Neil Cornelius said at the event. He describes the remodeled casino as: “customer-driven, entertainment-centric, comfortable.”

The renovation project originated as an upgrade for casino’s air quality system to address customer complaints about the smoky atmosphere. It then grew to include replacing the smoke-penetrated ceiling and walls and to consider adding other amenities.

The Crystal Lounge VIP room features white leather furniture and food and beverage service to those who use it. Bighorse said the VIP room is reserved for customers who are Club Osage cardholders with top-level (Crystal) playing status. The Club Osage card program, also renamed recently, has four levels of tiers for its customers: Ruby, Sapphire, Emerald and Crystal.

A new sit-down restaurant built in the Sand Springs casino is scheduled to open July 15.

Bighorse said the project costs were split down the middle with $4.5 million spent on renovating the interior and the other $4.5 million going toward the exterior including landscaping and a new main casino sign due to be placed in August.

The Osage Casinos are being revamped according to the master plan approved by casino and government officials. The Skiatook and Ponca City casinos are next for refurbishment projects with the Ponca City casino targeted for a new building.

The Nation has been discussing a casino project for years with particular attention on the Ponca City casino, which is currently housed in several trailers on the property east of the Arkansas River along U.S. Highway 60. It opened in December 2007.

To view the Osage News video of the reopening click here: http://osagenews.org/video/grand-reopening-osage-casino-sand-springs