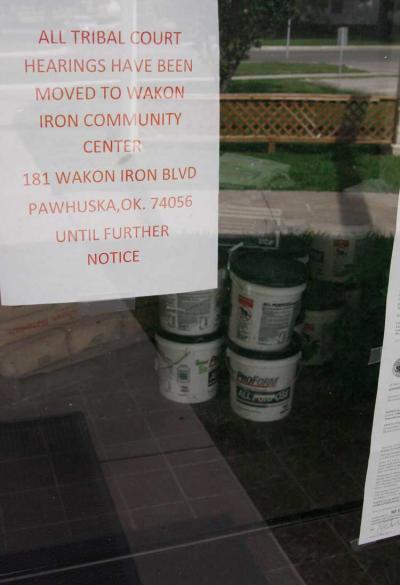 Osage Nation Tribal Court has been held at Wakon Iron Hall in the Pawhuska Indian Village since April. The reason: stachybotrys mold.

Stachybotrys, also known as black mold, was discovered in every room of the courthouse forcing the Nation’s Properties Department to evacuate all four employees working in the Judicial building. The employees, which included then-Supreme Court Chief Justice Charles Lohah, are Trial Court Judge Marvin Stepson and two court clerks.

Lohah has since retired and Stepson and one court clerk are now working out of the Nation's Attorney General’s office, located in a double wide trailer off of Grandview. The second court clerk has been put on unpaid administrative leave by the Nation’s Human Resources Department, according to court staff.

“Since March 20, 2012 we have been working to address issues related to water infiltration at the Judicial Building (Round Building). We filed a claim with the Nation’s insurance company to address the problem. We immediately called a restoration company to assess and remove water damaged sheetrock and insulation. Dryers and dehumidifiers were placed in these areas to dry out the areas with excessive moisture,” said Bruce Cass, director for the Nation’s properties department. “Upon communicating a possible mold problem with the insurance company we were instructed by the adjuster to halt all remediation work to allow for professionals to inspect and test the areas of concern. At that point we did just that.”

The month of April came and went with little progress to the Judicial building. Then, in May, a mold inspection was ordered and performed.

“The Nation was informed at that point that response to claims of this nature may take from 4 to 6 weeks to complete all required inspections and testing. On May 11, 2012 the Nation was authorized to proceed with demolition of the damaged areas. The Nation’s Properties Department proceeded with scheduling and started the demolition and ordering material to repair the damaged areas,” Cass said. “We will proceed with the appropriate repairs in house until such time that the insurance adjuster approves the claim and provides an agreed upon amount between claims adjuster and an independent contractor that is estimating the cost of repairs for the adjuster.”

According to the 22-page report conducted by TRC Environmental Corporation, Cass told TRC that three days of heavy rain around March 27, 2012, resulted in significant water intrusion in the Trial Courtroom and the offices along the west elevation of the building. Servpro Cleanup Service was engaged by the Nation to initiate drying procedures immediately following the rain, and the company Belfor (property restoration) was retained by Tribal First (the Nation’s insurance company) to conduct preliminary remediation activities.

According to TRC, May 11 was when the limited microbial assessment was performed on the court offices. The Judicial building is 5,000 square feet and houses the tribal court and the Osage Nation Police Department. The ONPD is located on the south side of the building.

The report showed the presence of five types of mold in nine rooms in the court offices and courtroom. The report was completed on May 15.

The Environmental Toxicologist, Mindy Olivares, conducted moisture tests and did tape lift surface samplings on visible mold found inside the walls. The results showed four types of mold with low to moderate readings in all nine rooms. They were Alternaria, Aspergillus/Penicillium, Chaetomium and Curvularia.

According to the CDC, “Stachybotrys is a greenish-black mold. It can grow on material with a high cellulose and low nitrogen content, such as fiberboard, gypsum board, paper, dust, and lint. Growth occurs when there is moisture from water damage, excessive humidity, water leaks, condensation, water infiltration, or flooding. Constant moisture is required for its growth. It is not necessary, however, to determine what type of mold you may have. All molds should be treated the same with respect to potential health risks and removal.”

TRC recommended that all work performed to the area be conducted in accordance with the “Guidelines on Assessment and Remediation of Fungi in Indoor Environments,” by the New York City Department of Health & Mental Hygiene, Bureau of Environmental & Occupational Disease Epidemiology.

The report recommended all sources for the water leakage found in the building be repaired. All walls, carpet, and materials in the courthouse impacted by the mold need to be disposed of and all materials associated, such as insulation, sheetrock, drywall, carpet padding, tack strips and other materials. The report recommended continued removal of two feet beyond all visible impact of mold. The HVAC filters in the building should also be changed.

The report recommended post remediation sampling. “Upon completion of the physical removal of scheduled materials and drying of the remaining materials, the entire area should be re-inspected and conditions documented.”

The report recommended four areas of remediation be met. Make sure the moisture levels of all remaining structural materials are sufficiently dry; no visible suspect fungal growth remain; there are no fungal, moldy or bacterial odors noticeable in the work areas; and that all visible dust and debris have been removed from the work areas.

The tribal court staff is less than pleased. Even though construction has begun and the renovation is underway, there was a period of about two months the court staff said they had no communication from the Executive Branch and no timeline was given to them as to when the renovation would be started or the progress of the operation. Court staff said they still have received no word as to when they will be back in the courthouse.

Judge Stepson said it’s unacceptable that it has taken so long to clean up the courthouse, especially since they are the third branch of government. The renovation hasn’t affected tribal court proceedings too much, he said, but holding court at Wakon Iron is an inconvenience for tribal members and makes it difficult to control his courtroom at times. But, they have been able to proceed with civil cases but the longer-term cases have been affected.

There was an instance when a program of the Nation had booked Wakon Iron Hall on the same day that the Nation's trial court was to proceed, forcing the trial court to be held outside.

“In late March we discovered a lot of mold in our offices, we’ve known that for quite a while because every time it would rain the carpet would get wet and Judge Lohah would get ill,” Stepson said. “I didn’t think it was a safe environment, so that’s why we hold court at Wakon Iron.”

Former Chief Justice Lohah, who was diagnosed with terminal lung cancer in March of 2011, said his coughing would get worse every time he went to work.

“I think it was something that added to just an annoyance on top of everything else. It made me cough a lot, but I was coughing a lot anyway but I would cough even more when I was in my office,” he said. “They noticed the problem in my office for over a year and thought it was just localized in one little spot in my office, and finally my clerks got someone to check it out and (two men from the ON Maintenance Department) spotted the mold.”

Lohah, who stepped down from his post in April of this year, said once the mold was spotted all his belongings in his office were packed up.

According to the CDC, “Mold exposure does not always present a health problem indoors. However some people are sensitive to molds. These people may experience symptoms such as nasal stuffiness, eye irritation, wheezing, or skin irritation when exposed to molds. Some people may have more severe reactions to molds. Severe reactions may occur among workers exposed to large amounts of molds in occupational settings, such as farmers working around moldy hay. Severe reactions may include fever and shortness of breath. Immunocompromised persons (low immune systems) and persons with chronic lung diseases like COPD are at increased risk for opportunistic infections and may develop fungal infections in their lungs.”

The Osage News asked Lohah if he would be pursuing any legal action against the Nation and he said, “Oh no, gosh no.”

Judge Stepson said that when he came to work his tongue would burn and the back of his throat would hurt.

“If it was my choice I would have called a company that specializes in this type of work and they would have come in and done the work in a hurry and then you pay them,” Stepson said. “I can see two to three weeks, but going on [three] months, that’s not right.”