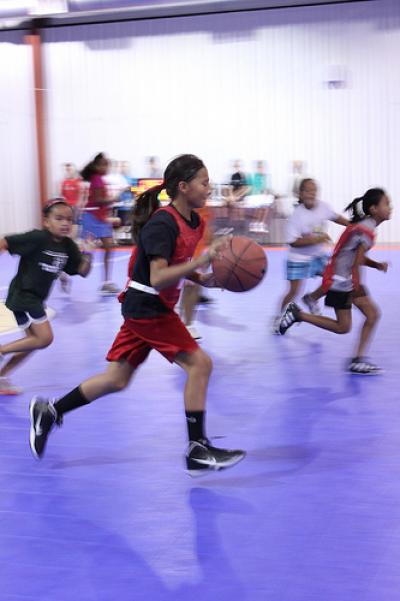 The Osage Nation Foundation kicked off their youth summer camps with a five-day basketball camp.

The camp was held on Monday, June 18 through Friday, June 22 at the Osage Nation Boys & Girls Club in Pawhuska.

“Our goal with the clinics is to help our youth learn skills, techniques and stay active,” said Bill Webb, executive director of the Osage Nation Foundation.

Webb teamed up with Scott Hill, a former University of Oklahoma football player, who helped arrange two coaches to come on board: Johnny Vick and Todd Bonnewell.

Vick is the head coach for the Tuttle High School girl’s basketball team and Bonnewell is the defense coordinator for the Watonga High School football team.

Vick said he had a great time working with the youth and teaching them the fundamentals of basketball while still having fun.

“I think the kids enjoyed learning about basketball this week,” he said. “I think the camp is a great idea to get kids involved in the summer and it gives them an outlet to do something during the day.”

Webb adds that the camp is not necessarily about getting better at the sport but educating youth on various topics like nutrition, exercise and goal setting. The camp also had special guest Obi Muonelo, a former Oklahoma State University basketball player come talk with the youth.

“It was really cool meeting Obi,” said Cunningham. “He showed us his championship ring he got and he said his brother was a basketball player and taught him how to play basketball.”

Cunningham adds that he told the participants to “never give up and to keep on trying.” Cunningham said she wants to play basketball when she gets older and will follow his advice.

“The leadership of our foundation believes that there is nothing more important than helping our next generation of Osages, and other youth in our communities, develop and maintain healthy habits and lifestyles,” Webb said. “That is what the camps are all about.”

To watch the Osage News video on the basketball camp, visit: http://osagenews.org/video/osage-nation-foundation-basketball-camp