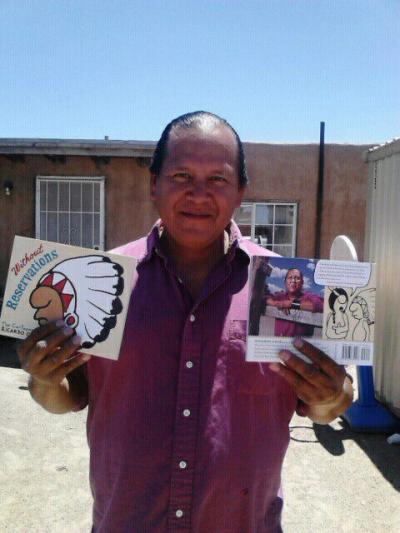 Santo Domingo Pueblo cartoonist Ricardo Caté describes Indian humor as the result of Natives living in a dominant culture who often fall short of fitting in.

His way of communicating that humor in his cartoon illustrations titled, Without Reservations, has struck a funny bone in Indian Country.

His second book, a compilation of cartoons to be published by Gibbs Smith Paperback for $9.99 in August, is a continuation of his popular daily cartoon featured in the Santa Fe, N.M., newspaper The Santa Fe New Mexican.

“Caté’s cartoons serve to remind us there is always a different point of view, or laughing at every day scenes of home life where Indian kids act just like their brethren of different races. Without Reservations is always thought-provoking whether it makes you laugh, smirk, or just enjoy the diversity of thought to be found in Indian Country,” said Wes Studi, Native American actor/director.

Caté has been drawing the daily cartoon for The Santa Fe New Mexican since 2006. His wry and often poignant humor pokes fun at both the white man and the Indian. Ricardo follows the ways of his Kewa Pueblo heritage and teaches on the reservation. He has three children and lives in the Santo Domingo Pueblo, N.M.

Caté has been drawing cartoons for the Osage News since June, 2009.

For more information on Caté and Without Reservations visit his Facebook page athttp://www.facebook.com/WithoutReservations.