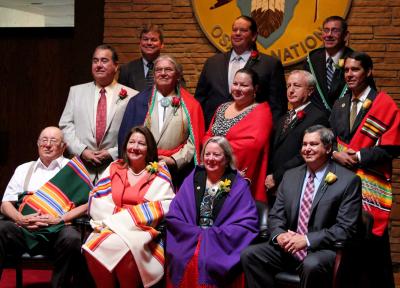 Osages elected to Third ON Congress take oath of office

On Independence Day six Osages took the oath of office to serve on the Third Osage Nation Congress at the Congressional Chambers where they will serve their legislative duties over the next four years.

The Congressional inauguration comes nearly one month after the June 4 General Election and the newly elected Congress members will join Daniel Boone, John Free, Alice Goodfox, Raymond Red Corn, Geoffrey Standing Bear and William “Kugee” Supernaw in the Congressional Chambers for the next two years of legislative sessions on behalf of the Osage people.

The first Special Session for the Third ON Congress starts Friday July 20 at 10 a.m.

The inauguration occurred before a full-capacity room of Osages, ON government officials and family members of the newly-elected Congressional members. Overflow seating was arranged in the lobby with a television screen broadcasting the event to those attendees and online viewers thanks to an on-site camera crew.

The Legislative Branch invited Edwin Marshall, the Muscogee (Creek) Nation’s public relations manager, to speak at the inauguration but he could not attend due to illness, Branstetter said. ON Congressional attorney Loyed “Trey” Gill delivered Marshall’s prepared speech in his absence.

“As Congressmen, you serve, or will serve, in many capacities as you discharge the various duties of office,” Gill read from Marshall’s speech. “All of your responsibilities may be seen as fitting into four primary roles: as a legislator, constituent servant, a representative, and finally as an educator.”

“Social welfare, healthcare, program policies and governmental procedure and budgets are just a few of the issues that members vote on each year, with financial implications running in the millions of dollars. When it comes time for re-election, most members are judged on their voting record on these matters,” read Marshall’s speech. “Just remember and take to heart that you, and each of you, have a responsibility to the great Wah-Zha-Zhi people.”

At 10:29 a.m., Drent started calling the six new Congressional members up to the stage for their oaths, which took 10 minutes to administer. The crowd broke into applause when it ended with “congratulations!” from Drent.

The inauguration continued with gifts of Pendleton blankets and certificates for the new Congress members and wooden plaques for all 12 Second ON Congress members in attendance, thanking them for their service. Outgoing Congress members are Branstetter, Red Eagle, Mark Simms and Anthony Shackelford.

Red Corn, who is Congressional Second Speaker, praised Branstetter for her leadership and presented her with a purple shawl as a gift from the Congress during the inauguration. Branstetter (Hominy District) was elected Speaker in 2010 and has also served as chairwoman for the rules and ethics and government operations Congressional committees. She also served on the government reform commission, which created the 2006 Osage government.

"She did her best to ensure that the Congress was on schedule, on task and on time," Red Corn said of Branstetter in prepared remarks. "She deserves our recognition for a job well done."

“If you work with (her), you know there’s only one color,” Red Corn quipped, referring to the purple shawl that pays tribute to Branstetter’s high school alma mater, Hominy High School. The audience laughed.

Of her Congressional tenure, Branstetter said: “I’m not going to say it was all happy days,” but recalled there were challenges and hurdles, which were a “new learning experience.” Branstetter thanked her fellow Congressional members for their work and fought back tears as she said: “it’s been an honor and a pleasure to serve you.”

The attendees moved to the Osage Tribal Museum for a reception where Andrew Cote, grandson of museum director Kathryn Red Corn, and museum senior researcher Lou Brock played the piano for guest entertainment while they enjoyed cake, juice and other hors d'oeuvres.

Brock has played keyboard music for all three Congressional inaugurations since the First ON Congress took oath and described the event as “exciting” and a good “homage to the government and Constitution.”

After his inauguration, Maker said, “I’m so thankful to all the people who supported me.” He also said he thought of his grandfather, Ross Maker, who served on the Osage Tribal Council in the 1950s. “It’s starting to hit me now that I see it on paper,” Maker, a former Language Department instructor, said of his new title.

"I was very excited to take the oath," Whitehorn said. “I feel official now, I feel like it’s time to work,” she said referring to her first Congressional task – signing a Legislative Proclamation for the Congress to call itself into its first Special Session.

On July 20 the First Special Session starts and Congress will consider the following items: federal budget appropriations; consideration of property purchase and Congressional rule changes. The legislative body will also use the special session to hold election of its committees, committee officers, as well as Congressional Speaker and Second Speaker.

Visit the Osage News Flickr page to see more photos taken during the Third ON Congressional inaugration. The photos are at: www.flickr.com/photos/osagenews/sets/72157630422283428/