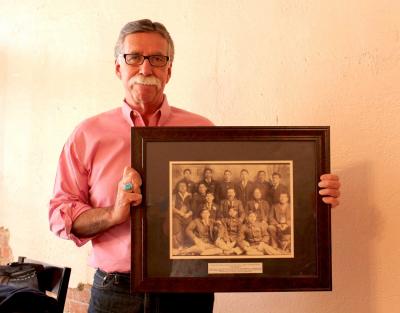 Joe Conner has had his grandfather’s Carlisle Indian Industrial School uniform hanging in his closet for several years. He finally decided it was time to pass it on.

Conner, Osage, sold the uniform, which his grandfather wore in 1886, to the Smithsonian’s National Museum of the American Indian in Washington, D.C. He also gave the Smithsonian two booklets, five photos and two Indian Clubs.

“My wife and I don’t have children and I don’t have too many nieces and nephews,” Connor said. “I wanted to pass it onto someone so I sent letters to various museums and turned out they all were interested in my grandfather’s uniform.”

Conner decided the NMAI was the best place for the uniform and other memorabilia because of their state-of-the-art facilities.

Conner mailed the uniform to the NMAI but hand delivered the other items in April, accompanied by his wife and a couple of friends.

One of the things the NMAI is trying to do with their collection is build a record of American Indian experiences over time, said Ann McMullen, curator to the NMAI. What Conner had was exactly that..

“The items showed George’s life at Carlisle and what he thought about the experience,” McMullen said. “It was a nice little package that showed so much of a man named George.”

Not to mention, the uniform is one of only two known to exist from Carlisle. The museum has one uniform dating from around 1916 but George’s uniform is the oldest McMullen has seen.

“From what I can tell there isn’t many Carlisle uniforms out there especially in pristine condition like George’s,” McMullen said.

McMullen adds that there is a misperception that the museum only collects items that only American Indians make and the museum is trying to change that.

“We want to share the lives of American Indians with people and hopefully we can do that with the collection from George’s life,” McMullen said. “There is a tremendous amount of information between the items."

Conner’s grandfather George Conner was born on the Osage Reservation near present day Chautauqua, Kans., in 1870. His parent’s were Le.Ah.Tsa and Little Doctor (Wah.Kon.Tah Zhin.Ka). Le.Ah.Tsa was the daughter of Little Bear (Wa.Sa.Pe Zhin.Ka) who was the Principal Chief of the Little Osages.

Little Doctor was killed shortly after George was born by Kansas Militia on his return from a hunting trip, Conner said. Le.Ah.Tsa then married William Conner (Oh.Hunka.Moie).

“When my grandfather was about five or six, Will and his mother were on a buffalo hunt in western Oklahoma when she was killed,” Conner said.

Conner added that newspaper accounts at the time reported she was giving birth to William’s child when she was set adrift on an ice flow in the Salt Fork of Arkansas River by unknown Indians. She and the baby died.

George Conner was then sent to live with his Aunt Margaret “Maggie” Lawrence on her ranch west of Grainola. The ranch was the only one leased by the Osage to an Osage woman, Conner said.

George had many duties on the ranch, one of which was attending to the bald and golden eagles the ranch kept.

“My grandfather told my dad that he didn’t like tending to the eagles because they would claw and peck at him,” Conner said.

Several Osage children were raised on the ranch and most of them were sent off to boarding school in Kansas. However, George was sent to Carlisle Indian School in Carlisle, Pa., from 1885-1890. George then returned a second time to Carlisle from 1896-1899.

“My grandfather talked to my father about his time at Carlisle and said it was a good experience,” Conner said.

The second time he attended Carlisle he helped with physical education of fellow students, including assisting with drills using 3.5-pound Spalding Indian clubs. He also helped coach baseball and other sports, according to Conner.

During his time at Carlisle George learned how to make harnesses and repair saddles.

“When he returned to the Osage Reservation he opened his own harness shop in Pawhuska, met his wife Lillian House, a matron at the Osage Girl’s school, and got involved with Osage resistance to the U.S. Government’s Allotment Act, otherwise known as the Dawes Act,” Conner said.

In 1899, George and Lillian moved west of Grainola after his stepfather was murdered.

“My grandfather told my father the reason they moved was because Pawhuska was too dangerous of a place to raise a family,” Conner said.

Plans are underway at the NMAI for an exhibit on the Indian Boarding school system. George’s uniform, along with the other items, will be displayed.

“Putting this collection on display for the public is important but so is preserving the items,” McMullen said.

McMullen is hoping the collection will provide rich material for someone doing research within the museum as well as outside of the museum.