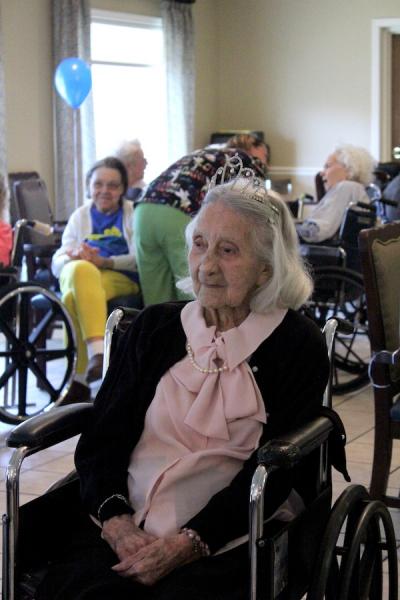 One by one staff members, friends and relatives went up to Rose “Sudie” Clevenger to wish her a happy birthday, showering her with hugs, kisses and handshakes.

Her 80-year-old daughter Nancy Bell tied a red balloon to her wheel chair while a nurse put a sparkling crown on her head.

“I am very honored to be the oldest living Osage,” Clevenger said.

Clevenger had a birthday party at the Colonial Manor Nursing Home in Tulsa where she resides.

“I didn’t think I’d even be 100 years old,” Clevenger said. “It is no different really, a lot of things are different but it is really a joy.”

A photo of Clevenger from her wedding day in 1924 was on display. Bell found a black and red baby shoe that belonged to her mother and set it next to the photo.

“It is surprising to me that she is 105. She has seen more than we will ever see,” Bell said. “She gets pneumonia every so often and we think it is time, but nope.”

Osage Nation Assistant Chief Scott BigHorse and KC Bills paid a special visit to the birthday gal. It turned out that Bills is Clevenger’s nephew and the last time she saw him was when he was five years old and was sitting on her lap.

BigHorse presented Clevenger with a proclamation from the Osage Nation. The Nation proclaimed July 10 to be Rose “Sudie” B. Clevenger Day.

“As we were singing the prayer songs I could see Ms. Clevenger nodding her head to the beat of the drum,” BigHorse said.  “It was a very, very blessed time.”

Clevenger was born in 1907 in Indian Territory and has three brothers. Her parents are Frank and Rose Shaw. Clevenger’s father spoke Osage and was the Assistant Chief from 1946-1950.

“Her real name is Rose but she has always been called Sudie,” Bell said. “Her father gave her the name and she liked it.”

Clevenger married Carl Musgrove, Osage, when she was 17 and he was 19 in Oklahoma City. They had three children; Nancy Bell, Bill Musgrove and Bob Musgrove, who were twins.

Clevenger and her family lived in Fairfax until Bell was 11 years old, then they moved to Tulsa.

In 1956, Clevenger’s husband passed away and she decided to travel.

At age 75, Clevenger got remarried to Clifford Clevenger. They were married for 14 years before he passed away.

“My mom was a homebody but she worked here and there,” Bell said. “She use to play the piano and harp, do needle work and make Indian jewelry.”

Bell visits her mother on a daily basis but if the weather is bad she visits her every other day.

In 2010, she was Miss Colonial Manor. Her favorite musician is Al Jolson and her scariest memory was in 1914 when she survived a cyclone in Fairfax.