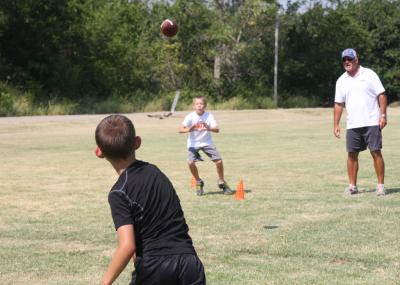 Big names in college football coach at ON Foundation camp

The camp is part of the Osage Nation Foundation’s summer youth camps and was held at Woodland High School’s practice football field.

“The foundation’s mission is to do everything they can to benefit the young people and various communities within the Osage Nation,” Hill said.

The camp focused on teaching basic fundamentals such as catching the ball, offense and defense, line play, skill positions and kicking.

“It was a little difficult for some of them to pick up at times but after the third day everybody knew how to line up and cover three, which was our zone call and cover one which was our man call,” Hill said describing defense maneuvers.

Participants also learned how to make a diamond shape with their hands so they could increase the chances of catching the ball and decrease fumbles, he said.

“That was cool when the former OSU player came,” said Michael Hight, football camp participant. “He told us to respect your parents and go to school because if you don’t stay in school you won’t get anywhere.”

Michael, 10, is Osage, Pueblo and Navajo, and will be a fifth grader at Skiatook Intermediate Elementary School.

He said enjoyed the camp and liked the drills that involved the tackling dummy.

“It was fun tackling the dummy because it was the only time we got to tackle,” he said.

During the camp, Michael said he learned the receiver routes and how to catch the ball.

“It was awesome that Scott Hill and Charles Thompson were my coaches,” he said.

Hight’s mother, Teresa Hight was very impressed by the camp.

“We were kind of upset there was no buses to drive him to the camp but after seeing the coaches and skill levels, we had no problem driving him,” she said.

Hight, Pueblo and Navajo, liked that the coaches included everyone regardless of their age or skill level. She also enjoyed seeing the coaches put their heart and time into the camp.

“We got a lot of good pictures and the advice the guest speaker gave to the youth was nice,” Hight said. “Giving my son that kind of support really meant a lot to me as a parent.”

After the camp was over, she sent an e-mail to Osage Nation Foundation Executive Director, Bill Webb, telling him how much she appreciated the foundation for hosting the camp and giving the youth something to do during the summer.

“It was really enjoyable to see my son get in the game and want to play,” she said.