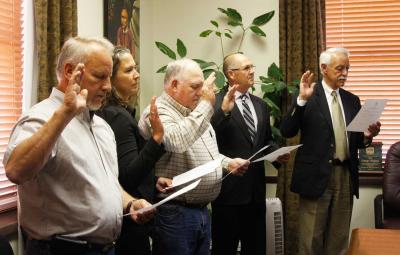 Osage Nation Principal Chief John Red Eagle appointed five people to serve on two boards. Those five were sworn into their board positions July 19 and are subject to Congressional confirmation this fall.

Three Osages will serve on the revitalized Osage Nation Enterprise (Inc.) board to enter into economic relations with entities outside the Osage Nation. The ONE is not new to the Nation, but has been stagnant for a few years.

ON Trial Court Judge Marvin Stepson presided over the swearings-in at the Executive Branch office in Pawhuska. Stepson also swore in two recent appointees to the Osage Limited Liability Company (LLC) board.

Chief Red Eagle appointed Randy Standridge, Jill Jones and Charles Hessert to the ONE board. The board is being utilized as the Nation enters into a partnership with an Oregon tribe’s company for energy-related projects.

The Nation is partnering with Yaka Energy to form a joint venture for energy projects, Jones said. Yaka Energy is based in Pendleton, Ore., and is majority-owned by the Confederated Tribes of the Umatilla Indian Reservation.

According to the company Web site, Yaka Energy’s services aim at providing commodities and risk and energy services for energy resources such as natural gas, electricity, jet fuel, coal, and alternative fuels (i.e. wind and biodiesel-B20).

Jones said the partnership would include drilling and pipeline construction projects. “It’s an opportunity for us to get into the business,” she said.

Judge Stepson also swore in recent LLC board appointees Jim Parris (Osage) and David Stewart for their board positions. He thanked the newly sworn-in people for accepting their appointments and added: “I know you’ll do a good job for the Nation.”

All five individuals will be subject to Congressional confirmation for their positions in the fall when the Third ON Congress meets for its first 24-day Tzi-Zho Session, which starts Sept. 4.