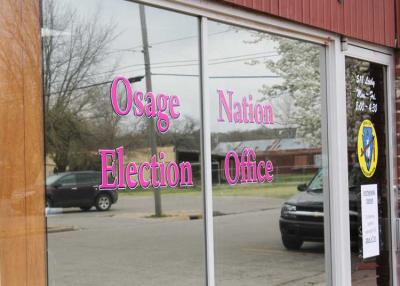 Osages are sounding off on the four proposed Constitutional amendments, which will be up for vote in the Aug. 13 Special Election.

In the special election, Osages will be asked to vote on four proposed amendments to the 2006 Constitution pertaining to the Osage Minerals Estate. Those amendment questions touch on defining the ON Executive Branch by excluding the Osage Minerals Council’ prohibiting the ON Congress from taxing the Minerals Estate; giving the OMC sole power over its election laws and replacing Constitution Article XV with a new section that defines the OMC.

One arena being utilized by the Osage public to discuss the proposed amendment questions is the Web, where blogs, social networking Web sites and electronic newsletters are being posted for voters to read. Osages are also sending out their opinions via newspaper letters to the editor and paid advertisements.

On the Osage Shareholder’s blog, Congressman Geoffrey Standing Bear, who wrote three of the proposed amendments said in a July 25 posting: “The votes will be the guide for decades on whether the Minerals Council will remain an Agency within the Osage Nation Executive Branch or be restored to independence. If things remain the same hten so be it, we will just have a Minerals Council whose authority is limited to approval or disapproval of leases and operating agreements and spending up to the 1 million dollars a year allowed by the BIA. Settling the issue that way will provide certainty at least. We will then have no legal argument or complaint about the Chief and Osage Congress doing everything else that was formerly with the old Osage Tribal Council pertaining to tribal regulation and programs which some may think should have been with the Minerals Council.”

The OMC, which worked with the ON Congress on the amendment questions, place paid advertisements in the Osage News and encouraged voting Osages to vote “yes” on the four amendment questions. “We encourage every Osage to make themselves familiar with these amendments,” the ad states.

On July 25, Washington D.C.-based attorney and shareholder Wilson Pipestem also posted on the Osage Community for Responsible Citizenry Facebook page. Pipestem said the fourth amendment was the most troubling to him. “It embraces the concept that there are two “tribes” – the Osage Nation and the Osage Tribe. This could have long term, negative impacts on the Osage government, the Osage people, and the Mineral Estate, in my opinion. It would institutionalize into Osage law a false and divisive distinction that comes from a competition for power between those that see the world as “shareholder” versus “non-shareholder.” There is only one federally recognized Osage government, and it is now called the Osage Nation. Further, the distinction is completely unnecessary. The 1906 Act continues to protect the Mineral Estate, the trust machinery that has existed for over 100 years that ensures that proceeds from the Mineral Estate are distributed to headright holders, and the right of headright holders to maintain this property right free form interference by Osage government.”

Joe Keene opined on the amendments in a July 26 posting on the proposed amendment prohibiting the Congress from taxing the Minerals Estate (ONCR 10-19). Keene wrote: “First off, no one knows what the future will hold, and our legislators should be trusted to make sound decisions for the Nation when the times call for it. Secondly, one has to think about what exactly ‘taxing’ the minerals estate means. A tax on the actual headright itself would of course garner no support and no one wants that. But what about a tax on pipelines that travel through the mineral estate? Would the Constitutional Amendment bar these kinds of taxes? Furthermore, can anyone define what the ‘mineral estate’ is? Is it any and all minerals underneath the ground, or is it only the oil reserves? What about groundwater under the Reservation? Can anyone answer these questions?”

The poll opens at 8 a.m. and is located at the Osage Nation Congressional Chambers and closes at 8 p.m. The results of the election will be announced that evening.

Once a voter is identified and has the proper verification, they are looked up in the Osage Voter Registry and asked to sign their name.

At 10 a.m. on Election Day the election supervisor, accompanied by Osage Nation Police, will retrieve the absentee ballots from a locked box from the Pawhuska Post Office and will immediately deliver the box to the polling place.

OMC Chairman Galen Crum attended a July 5 Election Board meeting. He took issue with the campaign rule restriction on prohibiting government resources from being used for campaigning purposes. According to the rules, using ON time, equipment, supplies or premises for campaigning is prohibited.

The OMC manages the Minerals Estate and is considered an independent agency within the Nation, according to the Constitution.

“I doubt voters would vote unless they knew how the Minerals Council felt about the amendments,” Crum told the board. “Your prohibition against using Nation resources makes it impossible for us to comply, we are a Nation resource.”

Board member Terry Hazen said the board was not trying to obstruct the OMC from its work. “That’s not our intent, we’re just trying to follow the law.”

ON Assistant Attorney General Clinton Patterson, also at the meeting, agreed. “Nobody wants to stop you from doing your duties,” he said, as the board agreed the issue needed more study. The board entered into a brief executive session with Patterson to discuss the situation.

After the executive session, the board said it would get an opinion from Attorney General Jeff Jones. “An official opinion is coming from the Attorney General’s office and until we get that opinion, we will not interfere with the Minerals Council’s efforts,” Election Board Chairman Walter Hopper said.

The Osage News inquired with the AG’s office on July 23, but Jones was out of town and Patterson responded through the Executive Branch and said an opinion was not ready yet.

On July 25, Chris White, executive director of governmental affairs, said: “the matter is still being researched and under review. No further comment on the issue will made until the AG has issued his opinion.”

The next Election Board meeting is scheduled for Aug. 2 at 2:30 p.m. in Pawhuska.