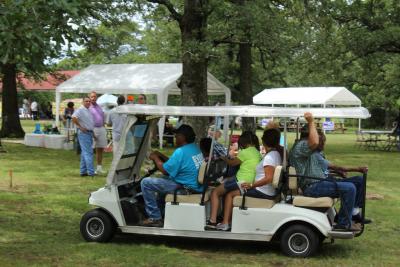 Amid cooler daytime temperatures, voters arrived by the handfuls or less at the Congressional Chambers where the voter booths are erected for the special election with four proposed constitutional amendments listed on the ballot.

The poll opened at 8 a.m. with Principal Chief John Red Eagle giving prayer before he and a few early voters cast their ballots, said Election Supervisor Alexis Rencountre. Despite the lower turnout, the ON Election Office prepared for a crowd with approximately 10 election volunteers who helped voters sign in and enforced the “no electioneering” rule to keep campaigning efforts away from the poll.

The first 25 voters received a turquoise blue t-shirt from election officials and Election Board Chairman Walter Hopper said 160 voters had turned out by the lunch hour. The sunny skies over Pawhuska brought temperatures in the upper 70s, which hit 86 by 3 p.m. – a much cooler day than the humid hot days which hit Oklahoma in recent weeks with temperatures hitting nearly 110.

Osage voter Joe Connor is one of the midday voters who cast ballots in person. “I’m always happy to take advantage of the franchise,” he said of exercising the right to vote. Conner did not say how he voted but added “I hope people did not vote out of fear.”

Discussion of the issues surrounding the four proposed amendments grew frequently online within the final weeks before the special election. Those discussions not only touched on supporting/ opposing the amendment questions, but also included questions on whether non-shareholder Osages should vote in the special election.

Voter Randolph Crawford also praised the weather. He said he drove up from Norman for the election to vote and visit friends and relatives while in the area.

At the government campus, Osage Minerals Council Chairman Galen Crum and Councilman Joseph “Sonny” Abbott set up a beverage station at the picnic area outside the electioneering perimeter. Crum said he didn’t know if someone had a beverage station in the works, so he brought an ice chest full of water and soda for voters who would like a drink and to visit with them under the picnic arbor across from the Indian Health Services Clinic.

Osages are voting on four proposed amendments to the 2006 Constitution pertaining to the Osage Minerals Estate. Those amendment questions touch on defining the ON Executive Branch by excluding the Osage Minerals Council; prohibiting the ON Congress from taxing the Minerals Estate; giving the OMC sole power over its election laws and replacing Constitution Article XV with a new section that defines the OMC.

The Osage News will publish the election results as soon as they are announced. The poll closes at 8 p.m.

The poll is located at the Osage Nation Congressional Chambers.

Once a voter is identified and has the proper verification, they are looked up in the Osage Voter Registry and asked to sign their name.

At 10 a.m. on Election Day the election supervisor, accompanied by Osage Nation Police, retrieved the absentee ballots from a locked box from the Pawhuska Post Office and delivered the box to the polling place.

As of July 26, the election office reports it has received a total of 1,886 total absentee ballot requests for the Special Election. This number is a combination of voters who requested absentee ballots for the June 4 election and afterward.